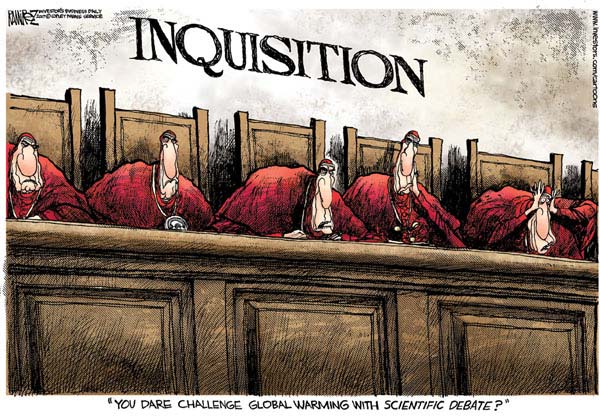 A moment of fun here for Senator James Inhofe, who declared victory over the global-warming hysterics this week in a speech covered by theÂ Tulsa World. Inhofe got a few laughs from a nearly-empty room by telling Barbara Boxer that the failure of the dire predictions of disaster from last decade to come to pass showed that he had been right all along, and that they could now “stick a fork” in the effort to hobble American productivity through the restriction of carbon emissions:

Andrew Bolt: I warn the US Congress

”It is literally crazy to be committing to an ETS (emissions trading scheme) before seeing the outcome of Copenhagen . . . and frankly idiotic before we see the final form of the US emissions trading scheme,” Senator Minchin said, flanked by at least 10 Liberal senators who have supported his anti-ETS views.

Tony Abbott has sniffed the winds in the party, too, and is switching sides…

I kind of opt for the “l” word again, and repeat: this is the most dishonest government in my memory.

Australian Climate Madness asksÂ how Kevin Rudd could be so stupid as to cite Galileo as evidence of theÂ evil of skepticism.

Kevin Rudd on November 7 predicts property losses by 2100, thanks to unchecked global warming:

Storm surges and rising sea levels –Â putting at risk over 700,000 homes and businessesaround our coastlines…

Penny Wong on November 14 predicts property losses by 2100, thanks to unchecked global warming:

Almost 250,000 homes, now worth up to $63 billion, will be “at risk of inundation” by the end of the century, under “worst-case but plausible” predictions of rising sea levels.

It must be said, that like the breaking of a great dam, the American descent into Marxism is happening with breath taking speed, against the back drop of a passive, hapless sheeple, excuse me dear reader, I meant people.

EU president wants Copenhagen to give us “global management”

Sure, this talk of the warmists at Copenhagen planning a new “world government” is crazy. I just wish the warmists wouldn’t talk of it themselves. Take the new and first president of the European Union, Herman Van Rompuy:

I’ve said it bluntly: Kevin Rudd lied and lied again when he said he’s offered no “special deal” to the asylum seekers on the Oceanic Viking. Â No political journalist believes Rudd

Controversy has exploded onto the Internet after a major global-warming advocacy center in the UK had its e-mail system hacked and the data published on line.Â  The director of the University of East Anglia Climate Research Unit confirmed that the e-mails are genuine â€” and Australian publicationÂ Investigate and the AustralianÂ Herald-Sun report that those e-mails expose a conspiracy to hide detrimental information from the public that argues against global warming (viaÂ Watt’s Up With That) More

8 thoughts on “The Global Warming Racket”