Authorities & media outlets are covering up Islamic terror attacks by dismissing the terrorists as being “mentally ill”.

“Mentally ill” jihadists  (we are told there are 300 of them) will now be treated by (at least) one dozen shrinks, who are, needless to mention, clueless about the  jihad ideology. To be hired at taxpayers expense.

The public are being lied to so governments don’t have to address the fact they’re importing a violent & incompatible ideology.

The Afghani vehicle jihadist from the Melbourne Flinders Street attack has just been charged with attempted murder –but seems to have evaded any terror related charges, despite ranting about Allah & admitting he was motivated by a perceived mistreatment of Muslims in a police interview.

Instead of attempting to ring-fence every potential target – ie, everything and everyone – with Diversity Bollards, we could try installing bollards where they matter – around the civilized world, writes @MarkSteynOnline We Are the Bollards 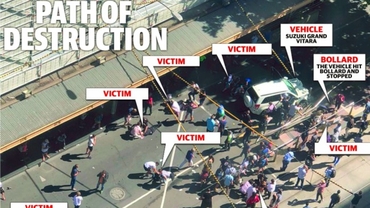 So there will be more empty seats round the Christmas table this year, after an “Australian citizen” mowed down pedestrians at the junction of Flinders Street and Elizabeth Street in Melbourne. The casualties include “a pre-schooler with serious head injuries”. The “Australian citizen” (I presume this designation is being used to emphasize that he’s entirely eligible to serve in Mr Turnbull’s cabinet) did it deliberately, but relax, lighten up, there’s no need to worry because, according to Victoria’s police commissioner, all this terrifying terror is “not terror-related“.

So he’s not a crack operative with the Islamic State’s Australian branch office, he’s just, as The Age‘s cheery headline writer puts it, “of Afghan descent and mentally ill”. A second man, arrested while filming the scene and found to have three knives in his bag, is believed to be nothing to do with the first man. Just another Australian citizen taking his knife collection out for a stroll.

You’ll recall there was a previous “vehicle attack” in downtown Melbourne earlier this year, after which the authorities ordered up the bollardization of every pedestrianized precinct in the vicinity. As Andrew Bolt writes:

After the Halloween jihadist killed eight people on a bike path in Lower Manhattan, New York’s bollardizers commanded similarly extravagant installation of Diversity Bollards up and down the city.

Last week I was tootling through Williston, Vermont, which has just reconfigured its highway system to run green-painted bike paths down the center of the streets. And the thought occurred to me that, once you’ve bollarded off every sidewalk, what’s to stop jihadists mowing down cyclists? After all, if the eco-crowd are installing them in the middle of the roadway, they’re kind of hard to bollard off.

I was over-thinking the issue. One of the problems with bollarding off pedestrians behind a wall of Diversity Bollards is that they still occasionally have to emerge from behind the bollards to cross the street, and it’s hard to bollard off a pedestrian crossing. In this case, the non-terror-related Australian citizen simply waited until the little green sign indicated it was safe for pedestrians to cross the street and then floored it. In an amusing touch, his car eventually came to a rest against a bollard.

What’s the solution? Maybe automobile manufacturers could replace airbags with Diversity Bollards timed to inflate whenever non-terror-related drivers with mental-health issues accelerate near pedestrian crossings. Or perhaps it would be easier to issue citizens of western nations at birth with an individual ring of bollards to wear about their persons at all time, starting with when they leave the maternity ward.

Alternatively, instead of attempting to ring-fence every potential target – ie, everything and everyone – with Diversity Bollards, we could try installing bollards where they matter – around the civilized world. To reiterate what I reiterated last time:

I don’t want to get used to it – and I reiterate my minimum demand of western politicians that I last made after the London Bridge attacks: How many more corpses need to pile up on our streets before you guys decide to stop importing more of it?

If your congressman or senator says that’s not on his agenda, what he means is he’s willing to sacrifice you and your loved ones in the suicide lottery of diversity.

~Speaking of non-terror-related Muslims, there’s a hot new hashtag trending in Britain called #AVeryMerryMuslimChristmas. This derives from the title of a new report by Westminster’s All-Party Parliamentary Group on British Muslims. “A Very Merry Muslim Christmas” purports to demonstrate that almost all Christian charity in fact comes from Muslims:

What we hear even less about is the ‘Muslim Merry Christmas’. The soup kitchens, the food banks, the Christmas dinners, the New Year clean up – work Muslim charities will be busy doing during the Christmas period.

Yeah, you Islamophobes thought that the “Muslim Merry Christmas” consisted of shooting up churches in Egypt and Pakistan, and mowing down shoppers in Berlin markets and Melbourne intersections, and self-detonating at Port Authority Bus Terminal. But you’ve got it all wrong: Allah is the reason for the season. Without him, this whole Christmas thing would be a total bust.

I have written before of Islam’s need to control the public space. Sometimes that means homicidally so – as in Melbourne and New York and Berlin and Nice and London Bridge and Westminster Bridge… But there is also a slyer and in some ways more provocative pressure to dominate the public square. As I wrote a couple of November 11ths back:

Not that many western Muslims want to shoot soldiers or stab the Queen. But those that don’t are, albeit more subtly, engaged in acts of “disruption”. Even the supposedly “Islamophobic” Daily Mail promoted this one as a feel-good story:

‘British Muslims are being urged to wear a new ‘Poppy Hijab’ – as a challenge to extremist groups who ‘spout hatred’ about the Armed Forces.

‘The scarf is backed by mainstream Muslim groups including the Islamic Society of Britain and profits from its sale will be donated to the Poppy Appeal.’

Well, that’s very nice of them, I’m sure, and the ladies look very charming in them. But, if they wished to reject “extremist groups” and support the armed forces, why couldn’t they just wear the same poppies that everybody else wears? Why does a communal ritual observed by the Queen’s subjects in every corner of the earth – Canadian, Bermudian, Tuvaluan, black, white, Protestant, Hindu – have to be Islamified to accommodate them?

There’s something deeply narcissistic about this: Just as every Muslim terror attack is really about the entirely imaginary anti-Muslim backlash that never comes, so everything else has to be about Islam, too. In some ways, “A Very Merry Muslim Christmas” is an even more audacious act of narcissism. Yet the same PC policemen that think sensitive retailers should say “Happy Holidays” and municipalities should hold “Winter Festivals” are delighted by #AVeryMerryMuslimChristmas and are hashtagging up a storm. If the novelist Lionel Shriver wears a sombrero in Brisbane that’s “cultural appropriation”, but “A Very Merry Muslim Christmas” is just heartwarming and inclusive. No “appropriation” to see here – are you paranoid or something?

Exactly a decade ago, I wrote in Maclean’s (which has since hosed the link):

There seems to be some kinky kind of competition on the Western left to be, metaphorically speaking, Islam’s lead prison bitch.

On the evidence of the fawning approval of #AVeryMerryMuslimChristmas from British MPs, university profs, Fleet Street columnists, minor celebrities, Anglican clerics, etc, the competition for that title is pretty intense. Almost everyone who matters in the west’s ruling class thinks that the solution to Muslim terrorism is things like a Merry Muslim Christmas. No, it’s not: That’s just a way to get to the same unhappy ending with fewer body parts.

~If you want Christendom in a nutsell, New Zealand reader Indra Hughes sends along this photo from the non-terror-related terror scene: 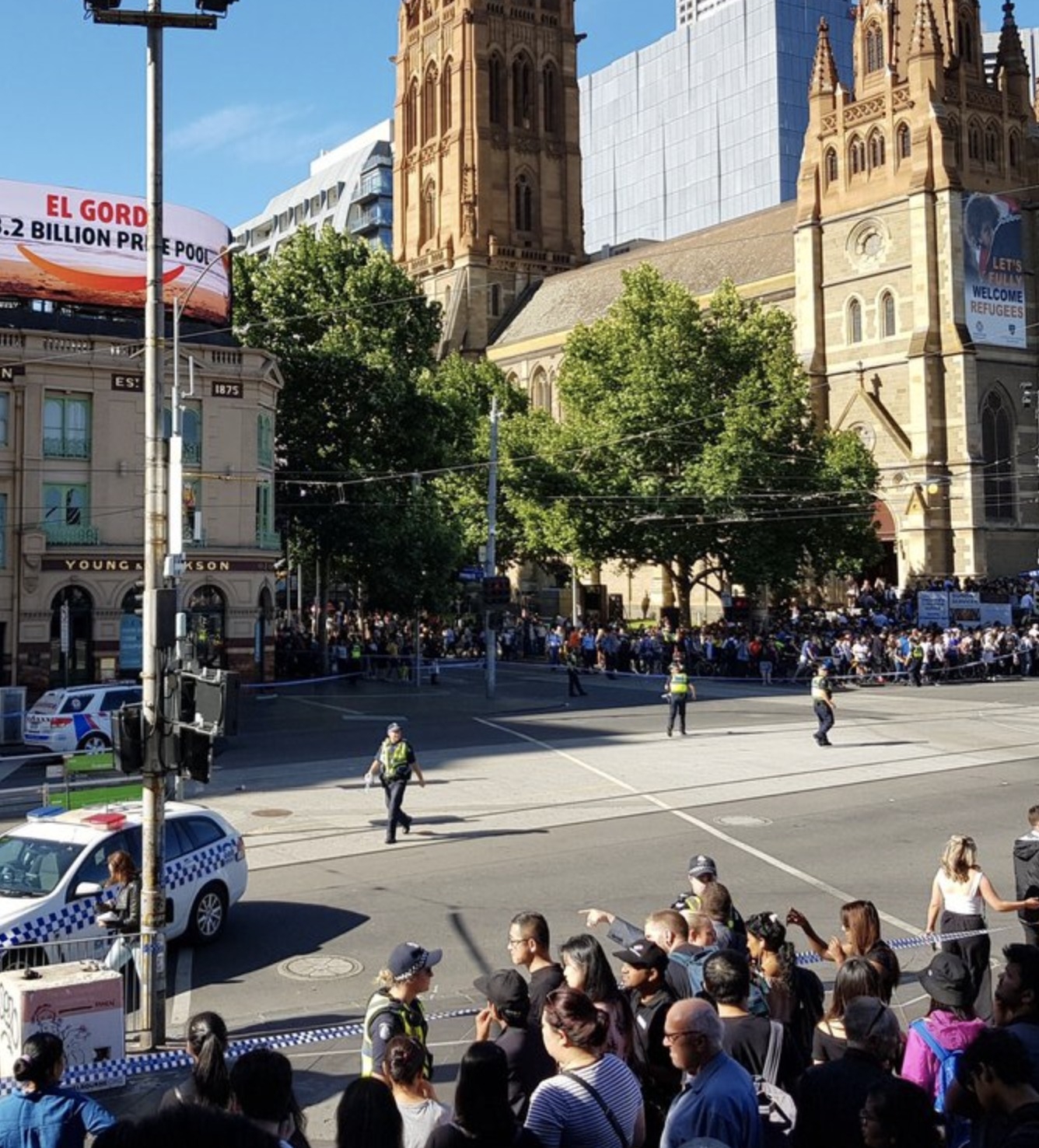 That’s the scene in Melbourne. At street level, the area is cordoned off. Thousands of law-abiding citizens are disrupted in their daily business by an Australian citizen “of Afghan descent and mentally ill”. At the far corner, that’s St Paul’s Cathedral. Can you see the banner they’re displaying three days before Christmas? Anything about Jesus? Christianity? No. Instead:

With apologies to the late Johnny Marks, all together now:

Oh-ho
It’s time to mow
Down people in your car
Infidels wait for you
Allahu Akbar!

Have a Merry Muslim Christmas
And in case you’re still not dead
Oh, it’s merry
Have an incend’iary New Year
Instead!

13 thoughts on “Australia: with diversity bollards & a dozen shrinks against Islamic mental patients”