While I am personally in favor of reversing Muhammedan immigration, there is no doubt that there are many Muslims for identification purposes only, some who call themselves Muslims out of filial piety or others who are secular and truly integrate and assimilate in a multicultural society. 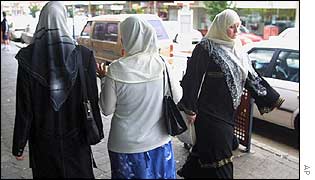 To separate friend from foe, perhaps our immigration officials should start asking the right questions.

Here is a test-list from Daniel Pipes, which many Muslims ‘proudly’ proclaimed they ‘failed’ on his blog.

Violence: Do you condone or condemn the Palestinians, Chechens, and Kashmiris who give up their lives to kill enemy civilians? Will you condemn by name as terrorist groups such organizations as Abu Sayyaf, Al-Gama’a al-Islamiyya, Groupe Islamique ArmÃ©e, Hamas, Harakat ul-Mujahidin, Hizbullah, Islamic Jihad, Jaish-e-Mohammed, Lashkar-e-Tayyiba, and al-Qaida?

*
Modernity: Should Muslim women have equal rights with men (for example, in inheritance shares or court testimony)? Is jihad, meaning a form of warfare, acceptable in today’s world? Do you accept the validity of other religions? Do Muslims have anything to learn from the West?

*
Secularism: Should non-Muslims enjoy completely equal civil rights with Muslims? May Muslims convert to other religions? May Muslim women marry non-Muslim men? Do you accept the laws of a majority non-Muslim government and unreservedly pledge allegiance to that government? Should the state impose religious observance, such as banning food service during Ramadan? When Islamic customs conflict with secular laws (e.g., covering the face for drivers’ license pictures), which should give way?

*
Islamic pluralism: Are Sufis and Shi’ites fully legitimate Muslims? Do you see Muslims who disagree with you as having fallen into unbelief? Is takfir (condemning fellow Muslims with whom one has disagreements as unbelievers) an acceptable practice?
Self-criticism: Do you accept the legitimacy of scholarly inquiry into the origins of Islam? Who was responsible for the 9/11 suicide hijackings?

*
Defense against militant Islam: Do you accept enhanced security measures to fight militant Islam, even if this means extra scrutiny of yourself (for example, at airline security)? Do you agree that institutions accused of funding terrorism should be shut down, or do you see this a symptom of bias?

*
Goals in the West: Do you accept that Western countries are majority-Christian and secular or do you seek to transform them into majority-Muslim countries ruled by Islamic law?

*
It is ideal if these questions are posed publicly – in the media or in front of an audience – thereby reducing the scope for dissimulation.

Justification of any Islamic Terrorism, Palestinian or otherwise

*
Supporting or refusing to condemn Osama Bin Laden, Al Qaeda, Hamas, or other terrorists or terrorist organizations by name

*
Demands for Sharia law in the West, or denying that Sharia forbids equal rights for women and members of religions other than Islam

*
Branding progressive Muslims or Muslims of different opinions as apostates.

*
Refusal to interact, converse, or socialize with non-Muslims

Now lets see how many Muslim posters we can attract to participate in this test, which should be compulsory.

7 thoughts on “Questions for Moderate Muslims”