*Whenever you have a Muhammedan atrocity you never hear much about the victims, but sure as hell you hear about the terror supporting crime families who squeak like swine and the MSM cries crocodile tears along with them:

* Right. Please note: Its not the ‘anti-Muslim backlash’- its the ‘Anti-Bosnian’ backlash this time.


SALT LAKE CITY, Feb. 14 â€” Most of the thousands of Bosnians living in the Salt Lake City area are refugees of war, and all of them are toughened by the experience of making new lives in a new country.

George Frey for The New York Times
*A Roman Catholic medal showing the Virgin Mary hung at the front gate.

* Now why would the Muhammedan family of the Killer hang a medal of the virgin Mary at the front gate? Are they trying to tell the infidels ‘look- we worship what you worship?’Â  They don’t.

Now, state and local officials say that the rage and grief after the multiple killings here in a shopping mall Monday by an 18-year-old Bosnian immigrant threaten a backlash, and they announced plans on Wednesday for outreach meetings and candlelight vigils to head off trouble and help the city heal.

“We’re concerned, and we’re trying to take proactive steps to keep this from becoming an issue,” said Patrick Thronson, a spokesman for Mayor Rocky Anderson.

Ljubica Roth, the president of the Utah Consortium of Multicultural Groups, an organization that works with refugees and immigrants, said, “We are all stressed.”

Ms. Roth said she received six reports on Wednesday of Bosnians in Salt Lake City being accosted verbally, mostly about how they got into the country, she said, or whether they intended to commit violence.

“Many people didn’t go to work today because they were worried about it,” Ms. Roth said.

The number of Bosnian refugees in the Salt Lake City area has been estimated to be 3,000 to 7,000, most of them Muslims fleeing violence by Serbs in the early 1990s.

‘Most of them Muslims…’ (See how they snuggled that in?)

Now for the pic’s:
John Buddensick passed the home of Sulejmen Talovic in the Rose Park section of Salt Lake City on Wednesday. 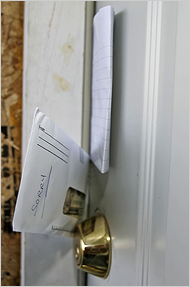 An envelope holding cash and bearing the word “sorry” was stuck Wednesday in the Talovics’ front door.

*What? Cash for the Killer?

Sorry for the killer or for the victims? Or is this possibly the ‘martyrs reward’ for killing infidels?

11 thoughts on “Here comes: The ‘BACKLASH’- that dreaded BACKLASH!”