Berlusconi made the apology during a visit to the Mediterranean city of Benghazi for a meeting with Libyan leader Muammar Qaddafi to seal a cooperation accord with the North African nation.

Speaking on behalf of the Italian people, he expressed regret for the “deep wounds caused by Italian colonization to the people of Libya.” He and Qaddafi then signed a “friendship and cooperation agreement” aimed at recompensing Libya for damage incurred during the colonial era.

“The accord will provide for $200 million a year over the next 25 years through investments in infrastructure projects in Libya,” Berlusconi said in remarks translated into Arabic.

“This agreement should put an end to 40 years of discord. It is a concrete and moral acknowledgment of the damage inflicted on Libya by Italy during the colonial era,” he told reporters.

Formerly a part of the Ottoman Empire, Libya was occupied by Italy in 1911 before becoming a colony in the 1930s. The country gained its independence in 1951 after a brief period under a UN-mandated Franco-British administration.

Italy and Libya have spent years negotiating a wide-ranging treaty to cover compensation for Rome’s military occupation and colonization.

US Secretary of State Condoleezza Rice is set to follow in Berlusconi’s footsteps next week, for the first visit by such a high-ranking US official to Libya since 1953.

Berlusconi, on his second trip to Libya since June, said that among the major projects to be financed by Italy will be a coastal motorway from the Tunisian border to Egypt.

Rome will also fund house construction, scholarships for Libyan students to study in Italy and pensions for those mutilated by land mines laid by the Italian military.

The agreement will also cover cooperation on the fight against illegal immigration, which Berlusconi termed a battle “against slave traders.” Funding for the coastal highway was promised by Berlusconi on a visit to Tripoli in 2004, when he headed a previous administration.

Berlusconi’s visit to Benghazi, 1,000 km east of Tripoli, coincides with the anniversary of the coup that brought Qaddafi to power on Sept. 1, 1969.Â Saif Gaddafi has criticised Lockerbie relatives for being ‘greedy’

The son of Libyan leader Colonel Muammar Gaddafi accused relatives of the Lockerbie victims of being “very greedy” for seeking compensation.

Saif al-Islam al-Gaddafi said the Lockerbie families had traded with “the blood of their sons and daughters” during negotiations over pay-outs for the deaths of loved ones.

Mr al-Gaddafi, who is seen by many as likely to succeed his father, also told BBC2’s The Conspiracy Files: Lockerbie that the Libyan government took responsibility for Britain’s worst terrorist attack only to get international sanctions lifted.

Jim Swire, whose daughter Flora died in the atrocity, said the compensation received by relatives could never make up for the loss of loved ones.

Former Libyan intelligence officer Abdelbaset Ali Mohmed Al Megrahi is serving a life sentence for the bombing of Pan Am flight 103 in 1988, which killed 270 people.

In a letter published in the Herald in Glasgow, Dr Swire wrote: “I just wish that the needs of the relatives, namely a thirst for the truth and for justice, would be attended to, rather than an alleged hunger for money. So far as many relatives I know would say, we would gladly repay any ‘compensation’ money if we could just have our loved ones back.

“Financial ‘compensation’ must remain in its inverted commas. Money cannot buy our families back.”

Seif al-Islam admitted the move was hypocritical, saying he believed that Abdelbaset Ali Mohmet al-Megrahi, the former Libyan intelligence officer convicted of the bombing, was not responsible.

Some 270 people were killed when Pan Am flight 103 from London to New York blew up over the town of Lockerbie in southern Scotland in 1988.

Asked if Libya accepted responsibility for the bombing, Seif al-Islam said in a BBC interview: “Yes, we wrote a letter to the Security Council (in 2003) saying we’re responsible for the acts of our employees, our people but it doesn’t mean that we did it in fact.”

He said: “What can you do? Without writing that letter, you will not be able to get rid of the sanction … I admit we played with the words. We had to, we had to, there was no other solution.”

Libya was brought back in from the cold after a decade of Security Council sanctions following the letter.

Relations with the US, which were cut off in 1981, were restored in 2004, a few weeks after Gaddafi announced that Tripoli was abandoning efforts to acquire weapons of mass destruction.

US Secretary of State Condoleezza Rice is visiting Libya next week, the first such trip by a top US diplomat since 1953.

Seif al-Islam also pulled no punches in criticising the families of victims, to whom Libya agreed to pay compensation in a move he himself brokered.

“I think they (the families) were very greedy and they were trading with the blood of their sons and daughters,” he said.

He said the families should stop “blackmailing” Libya and work with Tripoli “to find the real criminal who’s behind that attack”.

Megrahi was found guilty by a trio of judges at a special court under Scottish law in the Netherlands in 2001 and sentenced to 27 years in jail. He is appealing against the verdict.

Seif al-Islam said he hoped and believed Libya was not behind the Lockerbie attack.

Jim Swire, whose daughter Flora died in the Lockerbie bombing, told the BBC that many relatives of victims would find the comments “deeply offensive” but he thought this was “the Arab way of doing things”.

“The Libyans have achieved what they want – and Western commerce has got what it wants too. In this, many of us feel like pawns,” he said.

“And they all had a great time”

with thanks to Tundra Tabloids 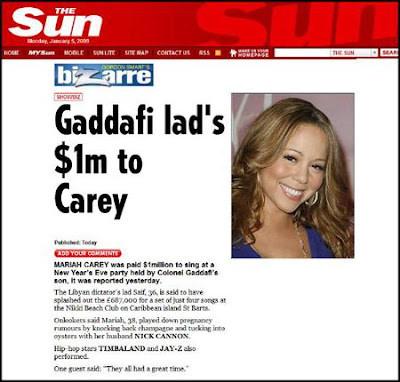 ReinhardÂ fromÂ FOMIÂ said: “Saif al-Islam Ghaddafi (Sword of Islam Ghaddafi!) paid Mariah Carey $1 million for a new year’s eve concert.Â No sympathy for the poor Gazans there.”
That’s sooooo right. The Arabs want the West to continually cough up the “jizya” for the Arabs, so that Arab leaders and their offspring can indulge themselves in their own fantasies, while their people cook with animal dung. I also question the morality and common sense of these music bimbos that take money from these tyrants, when in fact they should be giving them the cold shoulder, not bearing it.Â More here.Â KGS