* Â Could it be that the long suffering Norwegians had enough of their socialist manipulators and vote in a government that would not only move their embassy to Jerusalem, but also reverse the Muhammedan invasion into the country? 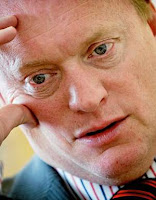 Norway’s Aftenposten reports that Deputy Foreign Minister Raymond Johansen has announced that he agrees with Swiss Foreign MinisterÂ Micheline Calmy-ReyÂ and would be willing to sit down andÂ ‘talk’ with Osama Bin Laden.

“You don’t make peace with your friends, but with your enemies,” said Raymond Johansen, state secretary in Norway’s Foreign Ministry and deputy foreign minister, on Wednesday.

Johansen told the website for newspaper Dagsavisen Wednesday afternoon that Afghan President Hamid Karzai has also called for reconciliation among the various groups in Afghanistan. That would include Osama bin Laden’s followers.

“We support that,” Johansen said. “Engagement and dialogue have a lot going for them.” He also stressed that “negotiations are not the same as weakness.”

Yes, except that even Johansen acknowledges that there is nothing to discuss.

Johansen, who also was the first high-ranking Western official to meet with Hamas leaders last year, didn’t reject her call. He noted, though, that he has no illusions that bin Laden would sit down for negotiations.

“I don’t think Osama bin Laden or the forces around al-Qaida want dialogue,” Johansen said. “They prefer rather to take the lives of infidels.” 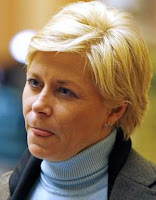 But good news from Norway may be on the horizon. The country’s most right-wing party – the Progress party – isÂ currently leadingÂ in all the polls with 31.9% of the voters. It is siphoning votes from the three leftist parties that are in the current governing coalition. And if the Progress party gains power, its leader, Siv Jensen, has said that she willÂ move Norway’s embassyÂ from Tel Aviv to Jerusalem (Hat Tip: Skjoldungen viaÂ Maverick News Media). Jensen is apparently willing to back it up – in February of this year, she wasÂ caught in a rocket attackÂ in Sderot.

I will move the Norwegian embassy from Tel Aviv to Jerusalem as fortress as possible.Â Hvorfor skal resten av verden bÃ¸ye seg for det massive arabiske presset og la vÃ¦re Ã¥ legge ambassadene til hovedstaden i landet?Â Why should the rest of the world bÃ¸ye seg for the massive Arab pressure and la be Ã¥ legge ambassadene to the capital in the country?Â Det er jo ingen andre land der det skjer.Â It is of course no other country that the skjer.Â Vi mÃ¥ vÃ¥ge Ã¥ stÃ¥ oppreist for Israel, sa Siv Jensen til de rundt hundre fremmÃ¸tte.Â We have to monitor river stand oppreist for Israel, sa Siv Jensen to the round hundre fremmÃ¸tte.Hun gikk ogsÃ¥ sterkt ut mot den norske midtÃ¸stenpolitikken som hun mener er urealistisk og israelfiendtlig.Â She gikk also sterkt ut mot the Norwegian midtÃ¸stenpolitikken which she believes is unrealistic and israelfiendtlig.

(Sorry, the original was in Danish and Google did not do a full translation. If anyone speaks Danish and wishes to send me a real translation, please feel free).

Is Jensen’s party’s growth a backlash from the natives against the growth of Islam in Europe? Maybe.

One thought on “Norway would talk to Bin Laden, but opposition would move embassy to Jerusalem”