* DeWinter is not the enemy. Treason is. Those who sabotage the counter jihad effort are traitors to our cause.Â

BTW, I saw Fallaci inÂ  what I think was her last public appearance back in November 2005, if you missed that post –Â go here. Here’s an excerpt of what I saw,

Oriana Fallaci -Â  frail, tiny hit that podium running.Â She looked up at us and saidÂ “you are my comrade in arms. Our opponents are leftists. Conservative are too genteel. You are warriors and warriors can not get tired.”

“Europe overflows with the witch hunts…. hits any one going against Islam. It overflows the withÂ  New Inquisition. Trying to muzzle. Oh yes, like your Ward Churchills, your Noam Chomskys, your Louis Farrakhans and your Michael Moore’s etc. TRAITORS!Â against which all antidotes seem to fail. Combined Neo nazi islamo fascism”Â [Atlas note: Fallaci spit these names out with such repulsion and utter contempt……..riveting]

Islam has no sense of justice. The crime?Â The crime of opinion. A crime now disguised as re-education of Islam. Religious racism xenophobia.

Like love, hate belongs toÂ  human nature. Should there be a penal code for the persecution for “hate”? Can we judge? Yes! It can be judged but only on a moral basis. For instance the moral basis of religion, the Christian religion, is based on love, not on a political basis or a criminal basis………..”It grants me the right to love who I want but also the right to hate who I want.”

“It is my sacrosanct right! Those that hate me try to silence me with penal codes.”

“And the West directs a hate towards itself. The West has lost its spirituality.It stands silent in the slander of Islam. “The censure of Europe”.
“Civilizations die from suicide, not by murder,” the historian Arnold Toynbee wrote.

On August 27, 2005, Fallaci had a private audience withÂ Pope Benedict XVIÂ atÂ Castel GandolfoÂ with whom she found a kindred spirit and whom she believes understands the mortal threat faced by Christianity by the evil of Islamofascism. The Pope loves her work. “I feel less alone when I read the books of Ratzinger.” I had asked Ms. Fallaci whether there was any contemporary leader she admired, and Pope Benedict XVI was evidently a man in whom she reposed some trust. “I am an atheist, and if an atheist and a pope think the same things, there must be something true. It’s that simple! There must be some human truth here that is beyond religion.” MoreÂ here

Fallaci claims to be neither left nor right. She despises the left for the obvious reasons and holds the right in contempt for being weak. For not taking a hard stand and making the tough choices.

“Don’t believe in a dialog with Islam. That’s a naivete. It can only be a monologue. They do not believe in pluralism. There is no such thing as a “moderate Islam” and a Radical Islam. There is only one Islam.”Â
I too believe this as much as it pains me to say it. I would like nothing better to believe that there is a side we can do business with, talk to. But that is self deluding.

Fallaci:“The real enemy is Islam and the most catastrophic threat is immigration not terror.Â It is immigration. And they do not integrate in Europe. Maybe in the USA but not in Europe. Those riots in France are a result of that very thing”. The Chinese, Vietnamese etc immigrants are not rioting and tearing down the very fabric of society.

They [The Islamists] are very patient. And Clever.

“WAKE UP WAKE UP. WE ARE AT WAR. WAR HAS BEEN DECLARED ON THE WEST AND WE MUST FIGHT. One or the other must perish.”
And while it was painfully clear she was preaching to the converted, it was also painful that the choir was so small. 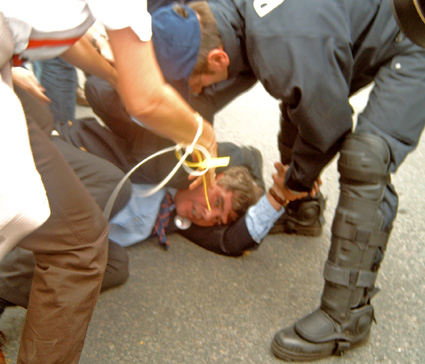 Today, Filip DeWinter spoke at a memorial for Fallaci. Tundra Tabloids has the speech ….. in a word,Â bingo

Flemish politician, and a leader in the Vlaams Belang party of Belgium, Filip Dewinter, delivered a sterling speech at a memorial for the late Orianna Fallaci, in Firenze last weekend.

Oriana Fallaci was an Italian journalist who passed away two years ago, who became famous for her interviews with a host of international celebrities, such asÂ Henry Kissinger, the Shah of Iran and the Ayatollah Khomeini, etc..Â She is also famous for her criticisms of the Pope and the Catholic Church, but also for her views on Islam, and on the present day politics of Europe that she saw as promoting its own colonization and Islamization by Muslim immigrants.

Filip Dewinter has drawn fire from every quarter for his views on Islam and an unfettered open ended immigration policy by the political mandarins in the higher echelons of power in both (the artificial construct) Belgium and on the EU level. Fallaci’s insight on what is at stake for the Europe’s future, is as relevant today as when she wrote and spoke about it herself. Don’t let the multiculturalists fool you, it has never been about race or ethnicity, but about the threat of Islam’s monoculture which Dewinter correctly describes as a “stagnant pool”.

Highly ironic don’t you think, that European multiculturalists are championing diversity with a policy that focuses on its own colonization by a people who cling to a monoculture ideology.(Read= no tolerance for others).Â KGS

*Â “Well, I think when we listen to terrorists talking about the new caliphate, and there are a bunch of guys sitting in the cave, we think they’re nuts. When a guy is sitting in the cave listening to Bill Keller explain proudly why he betrayed America’s national security interests, that guy in the cave would rightly conclude that we’re the ones that are nuts. And it’s hard to disagree with him.” — Mark Steyn

IF EUROPE IS TO SURVIVE, IT WILL HAVE TO DEPORT ALL MUSLIMS. REPEAT. ALL OF THEM.