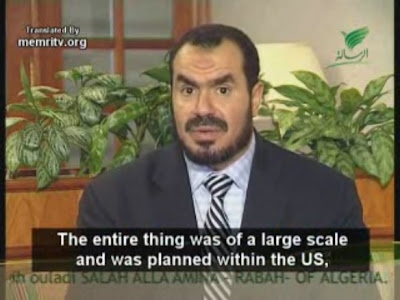 Â Â
It has been a while since we heard last from our local terror sheikh and Hilliard resident,Salah Sultan. That’s why I was so interested to see an interview with Sultan published by IslamOnline earlier this year addressing the upcoming elections, “Politicking US Muslims – How Can US Muslims Change Realities: Interview with Dr. Salah Soltan“.Â Â  Those who have been following Sultan’s activities and statements might recall that he gave an interview to the official Muslim Brotherhood website, Ikhwanonline, immediately following the 2006 elections, “US Islamic Center: Democrats More Tolerant Towards Muslims“.
Whole thing here
Â Â

The entire IslamOnline interview is definitely worth the read, and it is reprinted below in its entirety. There are a few curious statement I would like to point out. The most glaring is his statements about the political activity of the Jewish community in the US. Claiming that the number of Muslims in the US is greater than the Jews (a fact not supported by most polls, which finds the number of Muslims at no more than 3 million), he clearly wants Islamic political power to rival that of the Jewish community:

Jews are certainly less in numbers than Muslims now in the US. Our number is between 8 to 10 millions, yet although American Jews are no more than 6 million they have vision, plan, determination of whom to vote for and whom to ignore, and in some cases they support two candidates at the same time so that whomever wins becomes accountable to them. This is done in the Congress or the presidential elections. Jews in the US spend massive amount of money on elections’ publicity campaign…

Such exorbitant expenditure on US elections by Jewish-owned mega-businesses and organizations is not done in philanthropy.

Ah, but he’s not done yet. In fact, he relates a fictional account about how a Jewish community leader approached President Kennedy to help finance his reelection if only he would turn over foreign policy decision-making to the Jews. When Kennedy refused, they had him assassinated:

I will mention an example that Muslims in the US and Europe should be well aware of. Mr. Paul Findley’s book “Silent No More” says that President Kennedy in his second elections had a shaky stand, and accordinglyÂ a man responsible for 300 Jewish organizations proposing to fund all his campaign on one condition which was to place the keys of foreign policy in his hands, and Kennedy refused such proposal. The result was the assassination of John Kennedy.

So Salah Sultan claims that the Jews in America killed President Kennedy because he wouldn’t let the Jews control American foreign policy. Wonder how our interfaith leaders, like Sultan’s friend and Interfaith Association of Central Ohio board member,Â Abukar Arman, would respond to Sultan’s views on this topic?

Two other topics covered by Sultan in his IslamOnline interview should be noted:

Just as reminder, here are some of the organizations that Sultan worked with in Central Ohio:

Oh, and let’s not forget that one our local Muslim columnistsÂ Mahmoud El-Youssephproclaimed Sultan “one of America’s most-noted Muslim scholars”, andÂ Sultan was defended as a moderateÂ in a lengthy article byÂ Columbus DispatchÂ reporter Felix Hoover.

Sultan was the focus of thisÂ CBN NewsÂ report, “Jihad in Central Ohio“:

“One of these days, the U.S. will suffer more deaths than all those killed in this third Gaza holocaust. This will happen soon”

Not terribly surprising since he also once said that 9/11 wasÂ planned by America. As this report points out, however, Salah Sultan is not just another hate-preacher appearing on Arab TV; he also “holds U.S. permanent residency status and, according to one federal law enforcement official, travels regularly on a U.S. passport.” Moreover, he is on several prominent U.S. Muslim boards and committees — many of which (no doubt temporarily) removed his name from their websites and membership lists immediately after MEMRI translated and posted his tirade.

Islamic cleric Salah Sultan appeared on Egypt’s Al-Nas TV last week and delivered a warning of death and destruction for America. Not only did he attack the U.S. for its military support of Israel in its fight against the Hamas terrorist organization, but he vowed retaliation such that more Americans would be killed than those Palestinians (and, presumably, Hamas terrorists) killed in the present conflict in Gaza, emphasizing that this would take place “soon”:Â

“America, which gave [Israel] everything it needed in these battles, will suffer economic stagnation, ruin, destruction, and crime, which will surpass what is happening in Gaza. One of these days, the U.S. will suffer more deaths than all those killed in this third Gaza holocaust. This will happen soon.”

He also invoked a notorious Islamic hadith on the inevitable annihilation of the Jews by Muslims:

“The stone, which is thrown at the Jews, hates these Jews, these Zionists, because Allah foretold, via His Prophet Muhammad, that Judgment Day will not come before the Jew and the Muslim fight. The Jew will hide behind stones and trees, and the stone and the tree will speak, saying: ‘Oh Muslim, there is a Jew behind me, come and kill him.’ The only exception will be the Gharqad tree.”

This harangue would be nothing new on television in the Islamic world; in fact, it is commonplace.Â What is unique about Sultan’s threats against America is that he holds U.S. permanent residency status and, according to one federal law enforcement official, travels regularly on a U.S. passport. And as I have reported [1] elsewhere, Sultan is pursuing U.S. citizenship (the status of his application is unknown due to federal privacy laws). Thus,Â Salah Sultan has lived quite comfortably for more than a decade under the protections of the very country he now threatens with death and destruction.

It should be noted that Salah Sultan is not some obscure figure in the American Islamic world. He serves as a member of the [2] Fiqh Council of North America. Touted as the top Islamic governing body in the U.S., the Fiqh Council is an arm of the Islamic Society of North America. Sultan founded and served as president of the [3] Islamic American University in Southfield, Michigan; he was the national director of tarbiyah (Islamic instruction) for the Muslim American Society; and he continues to operate the [4] American Council for Islamic Research, based in my hometown of Hilliard, Ohio.

Sultan’s Al-Nas TV appearance last week was [5] recorded and [6] translated by the indispensable Middle East Media Research Institute (MEMRI).Â Curiously, as soon as MEMRI published the video clips of Sultan’s harangue, references to Sultan’s membership with the Fiqh Council were scrubbed from its website. His name has been removed from its [7] list of council members, even though he appeared there as recently as early last week. However, Sultan is still listed as a member on the Fiqh Council’s [8] brochure posted online (no doubt that will be remedied as soon as they are informed of this report)…

One thought on “Headbanger of the Day Award: Salah Sultan”