… it couldÂ stir up racial or religious hatred,Â and it makes the Muslim Police angry! 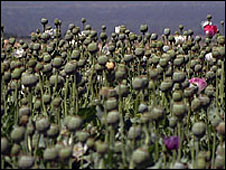 Muslim police leaders are demanding to know why no action has been taken over a leaflet which blames Muslims for the heroin trade.

* Newslink: fanatical frenzy makes kaftan-man stabÂ colleagueÂ in the head ‘to take her brains out’ after ranting about the Koran

The leaflet claims 95% of heroin comes from Afghanistan or Pakistan

The leaflet, distributed to hundreds of households in parts of Lancashire, Cumbria and Yorkshire, says people should “heap condemnation” on Muslims.

The Crown Prosecution Service said there was not enough proof it was meant to stir up racial or religious hatred.

The National Association of Muslim Police said the CPS advice was flawed.

The leaflet says Muslims are “almost exclusively responsible” for the manufacture, transport and sale of heroin, 95% of which it says comes from the Afghanistan and Pakistan region.

It says the process of “naming and shaming” Muslims will have a “positive effect” on bringing about the abolition of the heroin trade.

The Crown Prosecution Service said the contents of the leaflet were “racist” but has advised police that no criminal act had been committed.

The leaflets were made and distributed by an individual and not through a political party.

The National Association of Muslim Police said the CPS advice gave a green light to those behind the leaflet to continue distributing them.

Deputy Chief Constable for Lancashire Police Mike Cunningham said the matter was being taken very seriously and that the police roundly condemned the contents of the leaflets and those distributing them.

“They can only be described as inflammatory in nature and we are obviously concerned that their distribution in Lancashire could damage community cohesion.

“Once we were made aware of their distribution, we immediately investigated the situation and contacted key people in the local area so that we could reassure them that we were aware and could assess any tensions,” he said.

4 thoughts on “UK: Blaming Muslims for Heroin Trade Makes You a 'Racist'”