* Serious signs of resistance in Italy:Â

*Â Pallavicini delusions: “Islam has nothing to do with fundamentalism and violence”

ROME (Reuters) – Italy’s Northern League, allies of centre-right Prime Minister Silvio Berlusconi, want to limit the growth of Islam in the centre of world Catholicism by blocking the construction of mosques through strict new regulations. 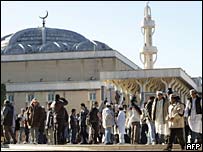 Muslim immigrants using Italy as a route into Europe already get a foretaste of the mistrust with which many Europeans view their religion, with many projects for mosques and prayer halls already blocked by the opposition of local Italian residents.

But if the anti-immigrant Northern League pushes its bill through parliament — where Berlusconi’s coalition has a strong majority — Italy will soon have a new law effectively blocking the construction of new mosques in much of the country.

Fearing the advent of “Eurabia”, the League has used its control of Berlusconi’s interior ministry since helping him to power to push through tough new laws against illegal immigrants.

It has now turned its attention to the newcomers’ religion, emboldened by polls showing many Italians mistrust Muslims and a third do not want a mosque in their neighborhood.

The Northern League has “made life difficult for the Islamic component (of immigrants in Italy) in every sense and especially with regards to places of worship”, the president of the Islamic Cultural Institute of Milan, Abdel Hamid Sha’ari, told Reuters.

Not just recent or illegal immigrants feel unwelcome, but also established Muslim residents like Jihad Amro, who said: “I have paid taxes for 17 years but I still don’t feel at home.” (cry me a river/ed)

“There are still situations where I feel uncomfortable or strange because they (Italians) don’t see me as someone who is integrated,” Amro, a Palestinian, told Reuters TV in Rome.

The League’s anti-Muslim protests have often made headlines, such as when Roberto Calderoli, now a cabinet minister, walked his pet pig on a proposed mosque site to defile the soil or wore a T-shirt of the Prophet Mohammad, triggering riots in Libya.

The League runs many town halls in the prosperous north, the homeland it calls “Padania” which is also home to a majority of Italy’s immigrants and of its more than 1 million Muslims.

Estimating that permission for a new mosque or prayer hall is granted somewhere in the country every four days, Northern League parliamentarian Andrea Gibelli told Reuters: “I consider this to be an unfettered colonization of our culture.”

Arguing that Muslims can “pray anywhere” and do not need a mosque, Berlusconi’s allies have blocked Muslims from building their own place of worship in Italy’s business capital, Milan.

They have been shunted from a makeshift mosque on a pavement outside a converted garage to a velodrome, inspiring Islamist parliamentarians in Egypt to demand sanctions against Italy.

“Muslims in Italy have the right to open some prayer halls or formal mosques,” said the president of the Muslim World League in Italy, Mario Scialoja. (who gives them that ‘right? Allah?’)

“I can understand some political parties or Italian communities may have problems seeing a mosque built in their area, as it might hurt the value of their property,” he told Reuters. “But a solution has to be found.”

At present requests for mosques to be built are being blocked in Venice, Bologna, Trento and Treviso, among others. In Trento the League has collected 15,000 signatures and in Treviso it has called young local Muslims “extremists, pure and simple”.

The League bill would ban mosques from being built within a kilometer (0.6 miles) of a church, oblige imams to speak Italian, link the size of the mosque to the number of the congregation and forbid muezzins from using loudspeakers to call the faithful to prayer.

It will ban minarets and, crucially, give the final word to local residents via a referendum — which would effectively mean no new mosques in League-dominated areas of the north.

“Nobody wants to build a mosque or open a prayer hall near a Catholic Church,” responds Scialoja, a former Italian ambassador to Saudi Arabia who converted to Islam two decades ago.

*Â Rome’s Envoy to Saudi Arabia Converts to Islam too.

“Mosques should be located in areas where Muslims live and where they don’t provoke or create problems for the surrounding Italian population,” he said.

Pensioner Isabella Fanicula, who lives near the latest site of Milan’s itinerant mosque, asks: “Why do they have to stay here in the middle of all the people? People have their homes here. They should go away, into the country somewhere.”

But the fate of a mosque in Colle Val D’Elsa in rural Tuscany, held up by ferocious opposition from locals and funding problems, suggests green-field mosques will not prosper either.

Italy: Minister proposes a registry for imams and mosques

Milan, 16 Sept. (AKI) – An Italian minister has proposed a register of imams in Italy in order to control the construction of mosques and a referendum to integrate new places or worship in a social and urban context.Â Â

Andrea Ronchi, European Affairs Minister, and member of the rightist National Alliance party, proposed the move on Tuesday in what he called a bid to improve interreligious dialogue.

Ronchi also wants to restart dialogue between Muslims and institutions such as the state-backed Islamic Council or Consulta per l’Islam.

However, Ronchi said he did not want Italy’s largest Muslim group, the Union of Islamic Communities of Italy (UCOII) to take part in the initiative, calling them “the real exponents of non-dialogue”.

“We do not speak to those who deny the existence of Israel,” he said.

Ronchi said that there should be no limit to the existence of mosques in Italy but they should be managed in a transparent manner and included in a national register.

“We need to put a stop to mosques being hurriedly built, without the consensus of the community. We need to match them with the reality of the place,” said Ronchi.

The initiative has already been carried out by COREIS, which has trained 20 Italian-speaking imams.

4 thoughts on “Viva Italia! Italy will soon have a new law effectively blocking the construction of new mosques in much of the country”