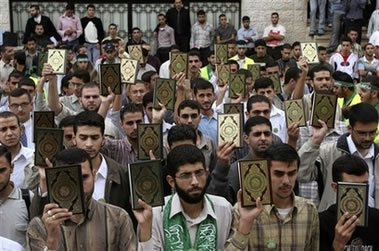 * any idea who these migrants might be? Once again; if we take a closer look, we quickly find that they’re not ‘migrants’ at all. Neither are they asylum seekers or refugees: they are Muhammedan invaders, and all this obfuscation by the media and the cowardice of the infidel governments assist them in the great game to make EUrabia Islamic.

ATHENS:Â About 80,000 migrants have traveled to Greece this year and decided to stay illegally, according to the authorities, who say the country can no longer handle the task of guarding the European Union’s southeast flank.

While initial problems with the flood of migrants from Africa and the Middle East who are desperate to enter Europe centered on the Aegean islands, migrants are now wreaking havoc in the capital.

The historic center of Athens has been riven by several street battles in recent months, involving what the police characterize as rival groups, often involved in dealing drugs, from Afghanistan, Iraq and war-torn African countries wielding swords, axes and machetes.

After 11 people were hurt in one such brawl in late August, the police began 24-hour patrolling of the area. Store owners and residents are leaving the busy central shopping and restaurant district.

According to a residents’ group, dozens of people renting in the area have left their homes in the past year, and several stores have closed, chiefly small but long-established neighborhood conveniences like bakeries, hardware stores or delicatessens.

“People are scared and depressed, it’s getting worse and worse,” said Vassiliki Nikolakopoulou of the group, Panathinaia.

The top policy adviser for immigration issues at the Interior Ministry, which also oversees public order, blames the influx of about 80,000 migrants this year.

“Because of this phenomenon, we see more and more immigrants in central Athens trying to survive, often through illicit activities,” the official, Patroklos Georgiadis, said in a telephone interview. “This unpleasant situation – for the migrants and for us as an EU country – has become unbearable.”

Georgiadis said that Greece supported the stricter line on immigration being promoted by the bloc’s French presidency. “There will not be another wave of legalization of immigrants in Greece in the near future,” Georgiadis said, referring to the three programs that have granted work and residence permits to some 500,000 migrants, most of them undocumented foreigners – at least half from Albania – since 1997.

The unrest in Athens has triggered a backlash from the far-right party Laos, whose popularity has jumped to 5.4 percent in opinion polls from 3.5 percent when it entered Parliament a year ago.

“The city center has been taken hostage by gangs of illegal immigrants with knives – isn’t it about time we asked ourselves if we have too many of them?” a Laos legislator, Antonis Georgiadis, said during a recent television debate. He is not related to the immigration official.

Although some on the Greek left have warned against demonizing migrants, the Athens prefect, Yiannis Sgouros, who belongs to the main opposition Socialist party, Pasok, refers to an “explosive problem” in the heart of the capital, where thousands of migrants living in cheap hotels and derelict houses struggle to find work.

“Illegal immigrants are becoming pawns to local drug barons and are forming gangs,” Sgouros wrote last week in a letter to Prime Minister Kostas Karamanlis. He added: “Something has to change or the area will become an arena for race clashes and gang wars.”

Thomas Hammarberg, a Swede who is human rights commissioner at the Council of Europe, has criticized Greece and other EU states for “criminalizing the irregular entry and presence of migrants as part of a policy of so-called migration management.”

* Bleeding hearts cry out in support:

“Political decision-makers should not lose the human rights perspective in migration,” Hammarberg wrote in an e-mail message when asked to comment for this article. “Migrants coming from war-torn states should be given refuge.”

The government says that Greece grants protection to all refugees, as long as their status can be proven. But UN refugee agency statistics show that Greece approves less than one percent of asylum applications, compared with a European Union average of 20 percent.

According to minority groups, the treatment of migrants from war-torn states as “illegals” rather than refugees requiring protection forces them to eke out a life on the fringes of society.

“Most don’t get asylum or social support and have to find other ways to survive,” Adam Ziat, leader of the Union of Sudanese Refugees, said in a dingy cafÃ© behind central Omonia Square that serves as his office.

According to Ahmed Mowias, coordinator of the Greek Migrants’ Forum, newly-arrived refugees from conflict zones are being exploited by rackets run by Nigerians, Moroccans and Algerians established in the area for many years. “Refugees are the smallest links in the dealing chain,” Mowias, a longtime resident of Athens who is from Sudan, said.

* Note: Nigeria, Morocco and Algerians: are these nations at war? With whom?

Police figures show that most immigrants arrested on drug-related charges in central Athens this year were from war-torn states like Sudan, Afghanistan, Iraq and Pakistan.

For most of these migrants, their first stop in Greece was one of the Aegean islands where reception centers are overcrowded and the local authorities are losing their patience.

On Patmos, in the eastern Aegean, the authorities this month blocked their ports to boats carrying passengers from Turkey, saying the number of unwanted visitors on their island had exceeded its 3,000 permanent residents.

The popular islands of Lesbos and Samos, which report getting boatloads of migrants almost daily, are calling on the government to take action.

But, according to Mowias, the government’s failure to create a comprehensive immigration and asylum system is the root of the problem. “When a group of people has no social support and cannot solve its problems, this leads to a crisis,” he said.

4 thoughts on “Athens: "Migrants are wreaking havoc in the capital"”