* Â Rumor has it that the elusive one-eyed mullah Omar, a close bin Laden associate, has been hit by a hellfire missile. Lets not make too much of it until it is confirmed, because recently the American Taliban Adam Gadahn was also said to be dead only to reappear a few months later….

* Well, it appears the story is another canard. Mullah Omar is alive and well…. 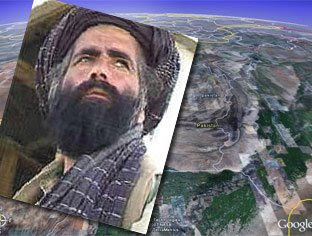 Dispatched to thatÂ 72 year old virginÂ in the sky.Â KGS/Tundra Tabloids
Â
BBC:Â US Strike’ Kills Taleban LeaderA suspected US missile strike has killed 20 people, including a top Taleban commander, in north-west Pakistan, witnesses and officials say. Mohammad Omar was among the dead when the missile, reportedly fired by a pilotless US drone, hit a compound owned by him in South Waziristan.
Omar fought with the Taleban in Afghanistan in the late 1990s.The US has launched many missile strikes from Afghanistan against suspected militant targets recently.
The latest strike on Sunday night was launched at a compound owned by Mohammad Omar in Mandatta village in the troubled region of South Waziristan. Mohammad Omar was a close associate of the dead Taleban commander Nek Mohammed, who was killed in a suspected US strike in the area four years ago. Witnesses said that the missile strike completely destroyed Mohammed Omar’s house, and partially damaged two neighbouring houses.

One thought on “Did Mullah Omar Meet His Virgins?”