The brain-police of KRuddistan is planning to spend 125.8 million for ‘cyber safety’ – and you can’t opt out 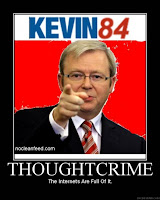 Australians may not be able to opt out of the government’s Internet filtering initiative like they were originally led to believe. Details have begun to come out about Australia’s Cyber-Safety Plan, which aims to block “illegal” content from being accessed within the country, as well as pornographic material inappropriate for children. Right now, the system is in the testing stages, but network engineers are now saying that there’s no way to opt out entirely from content filtering.

Australians will be unable to opt-out of the government’s pending Internet content filtering scheme, and will instead be placed on a watered-down blacklist, experts say.Â Under the government’s $125.8 million Plan for Cyber-Safety, users can switch between two blacklists which block content inappropriate for children, and a separate list which blocks illegal material.

Pundits say consumers have been lulled into believing the opt-out proviso would remove content filtering altogether.

The government will iron-out policy and implementation of the Internet content filtering software following an upcoming trial of the technology, according to the Department of Broadband, Communications and the Digital Economy.

Department spokesman Tim Marshall said the filters will be mandatory for all Australians.

“The upcoming field pilot of ISP filtering technology will look at various aspects of filtering, including effectiveness, ease of circumvention, the impact on internet access speeds and cost.”

Internet Service Providers (ISPs) contacted by Computerworld say blanket content filtering will cripple Internet speeds because the technology is not up to scratch.

Online libertarians claim the blacklists could be expanded to censor material such as euthanasia, drugs and protest.

“Users can opt-out of the ‘additional material’ blacklist (referred to in a department press release, which is a list of things unsuitable for children, but there is no opt-out for ‘illegal content'”, Newton said.

“That is the way the testing was formulated, the way the upcoming live trials will run, and the way the policy is framed; to believe otherwise is to believe that a government department would go to the lengths of declaring that some kind of Internet content is illegal, then allow an opt-out.

“Illegal is illegal and if there is infrastructure in place to block it, then it will be required to be blocked — end of story.”

Newton said advisers to Communications Minister Stephen Conroy have told ISPs that Internet content filtering will be mandatory for all users.

The government reported it does not expected to prescribe which filtering technologies ISPs can use, and will only set blacklists of filtered content, supplied by the Australia Communications and Media Authority (ACMA).

EFA chair Dale Clapperton said in a previous article that Internet content filtering could lead to censorship of drugs, political dissident and other legal freedoms.

“Once the public has allowed the system to be established, it is much easier to block other material,” Clapperton said.

According to preliminary trials, the best Internet content filters would incorrectly block about 10,0000 Web pages from one million.