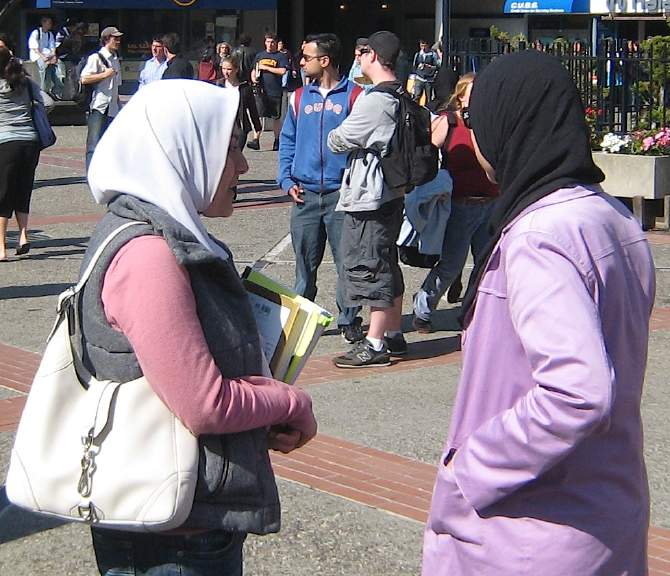 Dhimmis getting out of line are put back in their place. Will university administrators stand idle? “Arab Students at UC Berkeley Disrupt Israel Event, Attack Jews” by David Shamma forÂ Israel National News, November 16 (thanks to DW):

Arab students disrupted a pro-Israel event at the campus of the University of California at Berkeley Thursday night, unfurling a large Palestinian flag in front of a crowd of hundreds of supporters of Israel who were enjoying a pro-Israel hip-hop concert. The event was sponsored by the Zionist Freedom Alliance student group.The Arab students unfurled the large flag on a balcony above the outdoor site where the concert was taking place, inciting a provocation right in front of the concert-goers, who were enjoying the event as part of the campus’ Israel Liberation Week. Several Jewish concertgoers went into the building to ask the Arabs to remove the flag â€“ but were viciously attacked, with one male concertgoer knocked down from a blow on the back of his head, witnesses said.

College alumnus Gabe Weiner, who was helping run the concert, was assaulted by the leader of the anti-Israel group, Husam Zakharia, who also attacked one of the performers, Yehuda De Sa. The fight was finally broken up by John Moghtader, a senator in the UC Berkelely student organization. Police were called in and arrested Zakharia along with others from his group, charging them with battery. Witnesses said that the Arab students shouted anti-Semitic curses and epithets throughout the incident, calling the Jews “Nazis” and “dogs,” and threatening to kill them. According to one witness, as many as 20 anti-Israel students participated in the attacks.

In a statement, the Zionist Freedom Alliance said “we call on state officials, the President of the University of California, the Chancellor, the Dean of Students, faculty, and the student body to take a unified stand against the continued harassment of Jewish and pro-Israel students on this campus, particularly by members of Students for Justice in Palestine,” the anti-Israel group whose leaders began the incitement and attacked the concertgoers.

Jewish students complained that the only media coverage given to the event, in the Berkeley campus newspaper, was one sided. “Funny how the battery citation against Husam of SJP isn’t even mentioned [in the article], and the comment which purports to be from an objective bystander is actually from one of the top people in Students for Justice in Palestine,” commented Ariel, one of the concertgoers….

While Obama is recruiting his transition team from Berkeley, their disciples in the religion of tolerance, beauty and love viciously attacked Jewish students. Their insane jealousy and hatred of the good is what gives these zombies life:

5 thoughts on “Berkeley Jihad: a hotbed of tolerance and diversity goes apeshit”