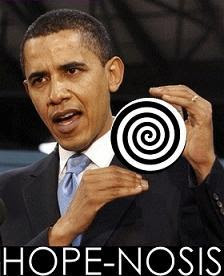 From the ‘Evil Conservative Blog’

Just in case anyone thinks that the reports of our new President Barack Hussein Obama using 70’s style-mass-hypnosis techniques on his audiences are overblown, I came across a series of Barack Obama videos on an NLP training site. Apparently the experts agree not only that he’s using it, but that he does it so well they can use his techniques to train others.Â

Some background on NLP and its use, from theÂ Association of American Physicians and Surgeons:

A fundamental tool of “conversational hypnosis” is pacing and leadingâ€”a way for the hypnotist to bypass the listener’s critical faculty by associating repeated statements that are unquestionably accurate with the message he wants to convey.

In his Denver acceptance speech, Obama used the phrases “that’s why I stand here tonight,” “now is the time,” and “this moment” 14 times. Paces are connected to the lead by words such as “and,” “as,” “because,” or “that is why.” For example, “we need change” (who could disagree?)…and…that is why I will be your next President.”
Techniques of trance induction include extra slow speech, rhythm, tonalities, vagueness, visual imagery, metaphor, and raising of emotion. Hypnotists often have patients count. In a speech after the primaries closed, Obama said: “Sixteen months have passed (paused)…Thousands (pause) of miles…(pause)…Millions of voices….”

Hand gestures can be used as hypnotic anchors, or to aid in hypnotic command implantation. They can be difficult to distinguish from innocent gestures used for emphasis. Obama, however, uses some gestures extraordinarily often and for very specific words such as “believe” and “chose.” His characteristic thumb-and-forefinger gesture looks like a hand holding a pencilâ€”as if you were in a voting booth. The gesture of pointing sends the subconscious message that a person in authority is giving a command.

Obama actually said at one time: “a light will shine down from somewhere, it will light upon you, you will experience an epiphany, and you will say to yourself, ‘I have to vote for Barack.’”

Here’s one of the videos from theÂ NLP training forum. This is an old one, but you can see how he’s deliberately using pacing and vague platitudes to get you in an agreeable frame of mind: please click on the link above if you want to watch the vid!

7 thoughts on “"Look Deep Into My Eyes": Is the Obaminator Using Hypnosis?”