Pamela makes no bones about it: Â This is the first anti-American American administration.

Put that in your peace pipe and smoke it.

FORÂ  SECURITY REASONS, THEY HAVE SUGGESTED THAT SHE HAVE A MUSLIMÂ  NAME .Â Â
SO, FROM NOW ON, PLEASE REFER TO HER BY HER NEW MUSLIMÂ  NAME:

“We happen to believe that moving toward a two-state solution is inÂ Israel’s best interests,” Clinton told a news conference with Foreign Minister Tzipi Livni.

Translation: We believe that Zyklon B is in the Jews’ best interest.

As the Obama Administration pushes for a Palestinian jihad base — er, state, the Secretary of State implies that Israel is no longer a friend of the United States. “Clinton: US to ‘vigorously’ promote peace efforts,” by Matti Friedman forÂ Associated Press,

And this from Carl in J’lem: 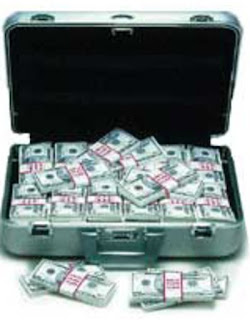 Why not withhold Western, Infidel aid, and ask the Gazan Arabs, and the Jordanians, and the Egyptians, and the Pakistanis, tutti quanti, to go ask for aid from the fabulously rich Saudis and other Arabs of the Gulf, in the U.A.E., in Kuwait, in Qatar? If they turn their fellow members of the Umma down, that will cause division, and possibly worse. If they do not turn them down, whatever they offer will be taken, but with the feeling that “the rich Arabs” can still do more, and more and more. Whether the aid is forthcoming or not, it will help to foster divisions and resentments among the Arabs, and even by the poorer non-Arab Muslims (as in Pakistan) against the rich Arabs. These kinds of resentments and divisions are useful to Infidels.

Think of the world of Islam as a closed system, and the world of the Infidels as another closed system. It isn’t accurate, of course, but what one wishes is to have as little contact between the two as possible, because recent experience shows that Westerners, Infidels, are easily fooled and manipulated, or in some cases begin to focus on this or that appealing gunga-dinnish member of the Iraqi or Afghani military, and forget the meretriciousness of the vast majority of people, and forget as well what can be found in the texts and tenets of Islam to constantly renew the hostility toward Infidels. Something — protection, or aid, or simple kindness â€“ may briefly make a few people, for a brief period, seemingly well-disposed. As soon as the Americans leave, the full ingratitude of the people in Iraq (not the “Iraqi people”) will become apparent to Americans. They will not be pleased.

The goal should be to force the rich states of the umma to be held responsible for the economic distress of the poorer (i.e., those who forget to have oil and gas desposits) members of the umma. No more money should be transferred than is already being transferred, in gigantic unheard-of amounts, from the oil-consuming Infidels to the Muslim states that happen to sit on top of that oil, or that gas — discovered, brought to the surface, transported by pipe to ships and then distributed around the world, all by Infidels. Remove the Infidels, and the entire oil and gas sales of the Muslim states would collapse. They could not find, could not lift, could not move, could not distribute, any of this themselves. What they can to is drive hard bargains. What they can do is spend money on palaces, and buying trillions of dollars in arms, and spending hundreds of billions on spreading Islam around the Infidel world.

Shrillary and the children:

FromÂ Hillary Clinton’s remarksÂ at the End of the Gaza Reconstruction Conference:Â

…this is about what happens to the children in Gaza and the West Bank. I got into politics because I care deeply about what happens to children. I could never have imagined that I’d be sitting here as the United States Secretary of State. My work has always been about how to give children a better chance to live up to their God-given potential.

Clinton: “Whatever we do will be done thoughtfully in consultation withÂ our friends and Israel“

As the Obama Administration pushes for a Palestinian jihad base — er, state, the Secretary of State implies that Israel is no longer a friend of the United States. “Clinton: US to ‘vigorously’ promote peace efforts,” by Matti Friedman forAssociated Press, March 3 (thanks to Jihad Watch:

JERUSALEM â€“ U.S. Secretary of State Hillary Clinton promised Tuesday to work with the incoming Israeli government, but delivered a clear message that could put her at odds with the country’s next leader: Movement toward the establishment of a Palestinian state is “inescapable.”At the same time, Clinton said she would not dictate orders to Israel, saying the Jewish state would determine its interests. She also pledged “unrelenting” support for Israel’s security.

Clinton also said the U.S. would soon send two envoys to Syria for “preliminary conversations.”Â It was the most significant sign yet that the Obama administration is ready to mend relations with the Damascus regime. The U.S. withdrew its ambassador in 2005, accusing Syria of supporting terrorism.

“We have no way to predict what the future with our relations concerning Syria might be,” she told a Jerusalem news conference. “There has to be some perceived benefit of doing so for the United States and our allies and our shared values. But I think it is a worthwhile effort to go and begin these preliminary conversations.”

Clinton lamented that President Barack Obama’s attempts to reach out to Syrian ally Iran have so far been unsuccessful.Â The U.S. and Israel accuse Iran of pursuing nuclear weapons and supporting anti-Israel militant groups.

Clinton, seeking to calm her Israeli hosts, said diplomacy should not be confused with softness.

“When we talk about engagement with Iran, do not be in any way confused, our goal remains the same: to dissuade and prevent Iran from acquiring nuclear weapons and continuing to fund terrorism,” she said. “Whatever we do will be done thoughtfully in consultation withÂ our friends and Israel, most particularly Israel.”…

One thought on “New Secretary of State”