Newsweek: “Radical Islam Is a Fact of Life- We Must Live With It”

“We’re coming to take you away haha, to the happy home with trees and flowers, we’re coming…” 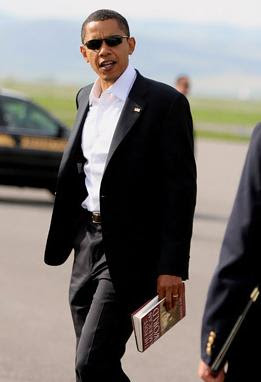 Barack Obama wasÂ reading, studying, and planning to be the leader ofÂ The Post-American WorldÂ during the campaign.

The book was written by Zakaria.

Obama is mentioned on page 255 of the book

Maybe a 9-11 attack every few years is not such a big deal after all?

Update: Obama seeks to take away religious rights of doctors and health care providers who refuse to perform abortionsÂ

Urgent: send your e-mail to the White House today!

Send your e-mail to President Obama opposing his plan to rescind the “conscience rule.”

Remember way back in the early days of the Obama administration whenÂ the presidentwent to Canada on his first foreign trip and as soon as AfghanistanÂ came up in the concluding news conference, the well-briefed new U.S. leader pre-empted a key question by saying he had not asked Prime MinisterÂ Stephen HarperÂ for more Canadian troops?

Because, as it turns out, Prime Minister Harper thinks victory for the allies in Afghanistan is simply not going to happen. In a fascinating and surprisingly candid interview with CNN’s ever-thoughtfulÂ Fareed Zakaria on “GPS,” here’s what the leader of the United States’ closest military ally there said:

“In fact, my own judgment, Fareed, is, quite frankly, we are not going to ever defeat the insurgency.”

Coming just days after Obama ordered 17,000 additional U.S. combat troops into that forever-fighting land as a mere holding action, pending further study and possible additional deployments, that’s got to be a stunner to the new White House team.

Americans historically have not taken well to not winning wars. The dreaded Q word (quagmire) came up even during the relatively brief fighting of 2001-02.

But throughout the presidential campaign Obama argued that Afghanistan was the real center of the war on terrorism where he would devote his major efforts. Pending an administration review of overall Afghan strategy/policy, Obama ordered the additional troops last week. With more possible later this year.

Canadians have fought with Americans as part of NATO since Day One of 2001’s Taliban-ousting. Unlike some NATO contingents, Canadian troops have been fully-engaged around the clock and have lost 108 soldiers, the highest per capita rate of allied forces. In an unusual nonpartisan agreement among major parties, Canadian leaders decided their combat forces would leave Afghanistan at the end of 2011.

“If President Obama were to ask me that question, I would have a question back for him.Â  And that question would be: What is your plan to leave Afghanistan to the Afghans, so they can govern it?

Because there are enormous risks there for us and enormous challenges. And I’m not saying we cannot improve things. But if we think — our experience has taught us, if we think that we are going to govern Afghanistan for the Afghans, or over the long term be responsible for day-to-day security in Afghanistan, and see that country improve, we are mistaken.

And so, if — I welcome President Obama’s renewed commitment to Afghanistan, the fact that they’re sending a lot more American troops. We’re delighted to have them, especially in Kandahar, where we need the partner.

But over the long haul, if President Obama wants anybody to do more, I would ask very hard questions about what is the strategy for success and for an eventual departure?”

We have a full video and a transcript of the rest of the Zakaria-Harper exchange on Afghanistan on the jump; scroll down or click the “Read more” line below.

ZAKARIA:Â  So then, why leave?

ZAKARIA: But it sounds like there is very little support in Canada for an extension of Canada’s mission, which expires in 2012, am I right?

HARPER:Â  Yes. It expires at the end of 2011. The issue in Canada, Fareed, I don’t think is whether we stay or whether we go. The issue that Canadians ask is, are we being successful?Â  And…

ZAKARIA:Â  What’s your answer to that right now?

HARPER: Right now, we have made gains. Those gains are not irreversible, so the success has been modest.

What has to happen in Afghanistan is, we have to have an Afghan government that is capable of managing that insurgency and improving its own governance.

ZAKARIA: So, we are never going to defeat the insurgency. The best we can do is train Afghan forces that can take it on, and then we withdraw.

ZAKARIA:Â  Is it your sense that Karzai’s government has legitimacy and should be backed?Â  What do your people tell you?

HARPER:Â  There is no doubt that governance in Afghanistan has to improve, and has to improve much more quickly than what we’ve seen in the first — how many years is it now — almost eight years?”

Here is a thorough rebuttal of Zakaria’s Islamo propaganda from Robert Spencer:

Newsweek: Let’s surrender to the jihad

Musharraf calls on U.S. to “initiate dialogue” and “negotiate” with the Taliban

According to the former Pakistani president, such steps are “the only solution to extremism, even if they did not succeed completely.” Interesting: the only solution to “extremism” is to give itÂ what it wants? “Musharraf says U.S. needs to talk with Taliban to resolve Afghan issue,” from theInternational News, March 2:

LAHORE: A troop surge will not solve the Afghanistan issue, andÂ the US will have to initiate dialogue to achieve peace, General (r) Pervez Musharraf said on Sunday.Â

During an interview with a British media, he said the international community had criticised him for negotiating with the Taliban in the Tribal Areas, but now the US would have to sign similar agreements with Afghan chieftains.

He said such accords were the only solution to extremism, even if they did not succeed completely.Â Comparing the war against terror to cutting the leaves off a tree, Musharraf saidÂ no matter how many leaves the US cut, more would grow, Online reported.