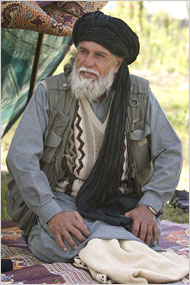 NYT Blog Â Update: Â Britain’sÂ Channel 4 NewsÂ aired a video report on Thursday night showing Taliban forces on the streets of the strategically important Pakistani town of Buner, just 70 miles from the country’s capital, Islamabad. AsÂ Carlotta Gall and Eric Schmidt explainÂ in The Times, a near total lack of resistance from Pakistan’s military has allowed just “400 to 500 insurgents,” to seize control of the area.

“Pakistan is the world’s only Muslim country which has a nuclear bomb, an Islamic nuclear bomb.” Â  Â More>>

The Channel 4 News report also features footage of a large Taliban rally earlier this week in the neighboring Swat Valley, where the government ceded control to the Taliban in a peace deal, and an interview with a spokesman for the Taliban in Swat.

On Wednesday,Â U.S. Secretary of State Hillary Clinton saidÂ that “the Pakistani government is basically abdicating to the Taliban,” but the spokesman, Haji Muslim Khan, said that Taliban anger was partly caused by the presence of female American soldiers in the region. Mr. Khan said that Pakistan’s Prime Minister, Yousaf Raza Gilani, “should think about Western white women who take up arms and come from 20,000 miles away to fight against us here.”

Given that the circumference of the planet is only about 25,000 miles, it is not clear what route Mr. Khan believes Western forces are taking to get to Pakistan.

3 thoughts on “Latest Taliban Excuse for Jihad: "Western white women who take up arms and come from 20,000 miles away to fight against us here.””