Keep looking. You are unlikely to find any among those who demonstrate against the Cologne Mega Mosque, but you find all of that and far worse on the other side, and in far larger numbers:

[1]Somebody called Horst Mahler (picture) wasÂ sentenced to 4 years in prison for denial of the Holocaust [2] lately and was detained immediately because of flight risk. Who is Horst Mahler? Horst Mahler (72) is the man who co-founded the left-wing-extremist terrorist “Red Army Faction” in 1970. He had been charged before with accusations, for example, of Holocaust denial, for saying the 9/11 attacks were justified, and for giving the Nazi salute when he reported to prison.

Before that, in the Seventies, the leading RAF-member Mahler was convicted for terrorist activities, including several bank robberies, and for helping head terrorist Andreas Baader to escape from prison. He was sentenced to 14 years but was released in 1980 after several public statements condemning terrorism. Early in the new millennium, he became a member of the neo-Nazi NPD for a couple of years and acted as their lawyer. Anything to help a totalitarian cause.

Was justice thus done? It seems so, doesn’t it? And isn’t German society dealing fair- and justly with their historical burden? Decide for yourselves:

Only months before Mahler’s conviction, a man who had almost stabbed a Jew to death (a Rabbi who was clearly identifiable as such)Â had been sentenced to 3 1/2 years in prison [4] for aggravated battery and harrassment after a charge of attempted manslaughter had been dropped. He left the courtroom as a free man, applauded by a grinning entourage. He will serve the prison sentence only after proceedings finally underwent all instances and have thus become legally binding, if at all, depending on the outcome of his appeal. 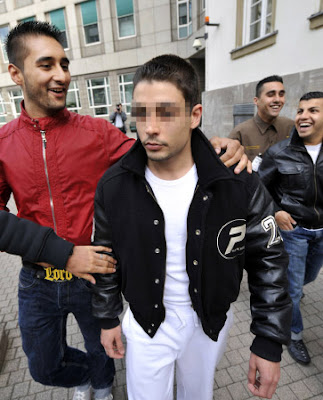 The defendant’s lawyers had stated that the fact that their client didn’t stab the Rabbi a second time meant an “abandonment of an attempt to commit manslaughter” and that he was just an ebullient young man who was just too fond of “brandishing a knife”. About the fact that he had delivered the blow together with a message, namely “I’ll kill you, youÂ ScheiÃŸ-Jude“, the perpetrator remained adamant,Â largely supported by the justice system and the maintream media [6], that there had been no antisemitic motive and that he had felt threatened by and physically inferior to the middle-aged, grossly obese rabbi. As the journalist Henryk M. Broder had put it then: “Here we have another case of self-defense, where the provocateur leaps aggressively into the provocatee’s knife as an answer to a friendly “salam aleikum”“, because, you may have guessed it, the perpetrator was not an ethnic German, but a culture-enriching German with Afghan parents and we cannot acknowledge Muslim-Islamic antisemitism because it would blow the entire beautiful concept of multiculturalism out of the water.

On a deeper level, we do not WANT to acknowledge it either, because then we’d lose the convenient guinea pig for tinkering with “tolerance”, a guinea pig which might as conveniently turn at lightning speed into a Jew-killing pitbull becauseÂ Germans love Jews when they are dead [7].

And that is why, in Germany, given the proper perpetrator line-up, you’ll get largely away with cutting a life Jew open, but not with a denial of the Holocaust.

InÂ FrontPage this morning I discuss recent Islamic calls for another genocide of the Jews:

No one told the Islamic Nazis that they lost World War II.The former prime minister of Malaysia, Mahathir Mohamad, recently asserted that Jews in Europe had “always been a problem.” He claimed that “they had to be confined to ghettos and periodically massacred. But still they remained, they thrived…held whole governments to ransom. Even after their massacre by the Nazis…they survived to continue to be a source of even greater problems for the world.”

Mahathir won fame in October 2003 for charging that “Jews rule this world by proxy.” In the same speech, he lamented that “the Muslims will forever be oppressed and dominated by the Europeans and the Jews. It cannot be that there is no other way. 1.3 billion Muslims cannot be defeated by a few million Jews. There must be a way….For well over half a century we have fought over Palestine. What have we achieved? Nothing. We are worse off than before. If we had paused to think, then we could have devised a plan, a strategy that can win us final victory.”

Final victory? A final solution, perhaps? Might Mahathir believe that Jews are due for one of those periodic massacres about which he spoke so approvingly?

In this Mahathir is not alone: several other Islamic leaders have spoken in similar ways recently. On January 29, Palestinian Authority TV, which is controlled by the ostensibly moderate Fatah faction of Palestinian Authority President Mahmoud Abbas, broadcast a Friday mosque sermon containing this reference to the notorious genocidal hadith in which Muhammad said that the end times would not come until Muslims started murdering Jews: “The Prophet says: ‘You shall fight the Jews and kill them, until the tree and the stone will speak and say: “Oh Muslim, Oh servant of Allah”‘ — the tree and the stone will not say, ‘Oh Arab,’ they will say, ‘Oh Muslim.’ And they will not say, ‘Where are the millions?’ and will not say, ‘Where is the Arab nation?’ Rather, they will say, ‘Oh Muslim, Oh servant of Allah — there is a Jew behind me, come and kill him.’ Except for the Gharqad tree, which is the tree of the Jews. Thus, this land will be liberated only by means of Jihad.”

Likewise, on January 12, a top Iranian official, Mohammad Hassan Rahimian, declared on Al-Manar TV: “We have manufactured missiles that allow us, when necessary, to replace Israel in its entirety with a big holocaust.”

On December 29, an Islamic cleric, Muhammad Hussein Yaaqub, said this on Egypt’s Al-Nas TV: “The Jews are our enemies. Allah will annihilate them at our hands. This is something we know for certain. We know this for certain – not because I say so, but because Allah said so. ‘You shall find that the people strongest in enmity to the believers are the Jews and the polytheists.'” That is a quotation from the Qur’an (5:82).

Ahmad Al-Barqawi, professor of philosophy from Damascus University, joined the genocidal chorus on Syria TV on December 15, 2009: “If the enemy reaches a stage in which it feels that it is paying a heavy price for its occupation – both in terms of human lives and in terms of resources – it will give up. Without this, there is no chance of reconciliation with the enemy. Therefore, I believe that the annihilation of Israel is easier than reconciliation with it. Annihilating Israel is easier than reconciling with it, because annihilating Israel through a long-term and consistent effort may bear fruit in a society that feels it is alien to this [Arab] world, and does not want to remain in a world that rejects by force.”

And on January 5, Yousuf Ahmad, head of Gaza’s Al-Faraeen TV bureau, said that Israel was “weaker than a spider web. By Allah, if the Arab nation decided to unite, the state of Israel would automatically collapse.” And if that happened, of course, wholesale massacres of Jews would be inevitable. Hamas leader Khaled Meshaal made a similar statement this on Al-Jazeera on December 15: “The resistance on the land of Palestine will be victorious and will drive those Zionists out of our land. We have driven them out of Gaza, even if they continue to besiege it. We will drive them out of the West Bank and all our Palestinian land, Allah willing.”

None of this should come as any surprise. The genocidal hadith quoted on Palestinian TV is just one element of an anti-Semitism that is deeply rooted in the Qur’an and Sunnah, and which runs through Islamic history with a remarkable consistency. What’s more, as Pamela GellerÂ has recently and exhaustively documented at AtlasShrugs.com, the notorious Grand Mufti of Jerusalem, Hajj Amin al-Husseini, was deeply involved in the planning and execution of the Holocaust in Europe. A great admirer and friend of Adolf Hitler, al-Husseini was involved in massacres of Jews in the Holy Land in the 1930s. And in July 1946 at the Nuremberg Trials, Dieter Wisliczeny, the deputy of Nazi genocidal killer Adolf Eichmann, testified that “the Mufti was one of the initiators of the systematic extermination of European Jewry and had been a collaborator and adviser of Eichmann and Himmler in the execution of this plan… He was one of Eichmann’s best friends and had constantly incited him to accelerate the extermination measures. I heard him say, accompanied by Eichmann, he had visited incognito the gas chambers of Auschwitz.”

Al-Husseini was drawn to his role in Hitler’s Final Solution by his loyalty to Islamic texts and teachings that demonize Jews and call for their murder. And as Mahathir and the other Muslims quoted above have shown, Muslims are still reading those texts and taking them seriously. The world yawns at this at its own risk.

2 thoughts on “Who are the Nazi's and who are the "Right Wing Extremists?"”