British Blogger Lionheart Vindicated: All Charges Against Me Have Been “Dropped”…

* Just yesterday Lionheart was (still) derided on the Bunglawussi blog for organizing an anti-extremist Â protest in the heart of Londonistan that apparently fizzled.

In any case, this is good news! Congrats! 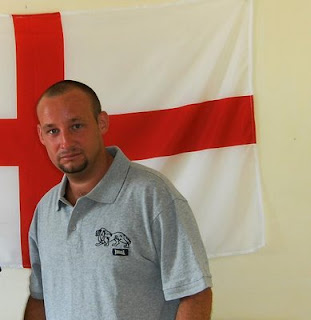 Lionheart:Â “British Islam is a threat to every man,
woman and child upon the British Isles”
–
It’s about time that the pendulum began to swing in the opposite direction. Blogger Lionheart is now fully free from charges of “suspicion of stirring up racial hatred“, because the state prosecutor’s office never had any evidence.Â
All charges against me “dropped”
–

I have been on police bail for 18 months on suspicion of ‘stirring up racial hatred’ through written material on this blog.

When my impending arrest first came about, I was in America and was advised by several American organisations and respected individuals that I should apply for political asylum there, but decided after speaking to my lawyer Mr SBLM (not Anthony Bennett who turned on Mr & Mrs McCann), that the best plan of action was to return to Britain and go through the motions of arrest and interrogation.

I was arrested, interrogated, then released and have spent the last 18 months backwards and forwards on police bail, awaiting the CPS to decide whether or not they were going to charge me and put me on trial for my words.

My next bail date was Friday 3rd July, but I have just received news from my solicitor that all charges against me have been dropped, so there is no case to answer over my blog.

Freedom of Speech has won, over the politically correct brigade who have tried silencing me, and members from their pet project British Islam who have wanted me prosecuted and silenced from speaking out against them and their religion. British Islam is a threat to every man, woman and child upon the British Isles, based upon 1400 years of experience and knowledge, and people like me, have a right and responsibility to talk about it openly, freely and honestly without fear of state persecution, prosecution or imprisonment.

May God bless each and every person who has supported me over the past 18 months, and beyond.

The battle for the heart and soul of Great Britain has begun!

A setback in the struggle against the Islamification of theÂ West

Over at hisÂ LionheartÂ blog, Paul Ray relates the sad tale of the mass anti-Muslim demo that wasn’t. It seems that one Dave Shaw had summoned like-minded patriots to join an “anti-extremist protest through the heart of Londonistan” last Saturday.