“Cutting” doesn’t describe it. “Circumcision” doesn’t, either. It is mutilation, plain and simple, and must be recognized as such. But at least this story doesn’t entirely tiptoe around the prevalence of the practice in Muslim countries.

It may be a millennia-old practice, but the fact remains that Islamic law embraced it, and that is the reason for its persistence — it is not at all merely “cultural.” From the Shafi manual of Islamic jurisprudence,Â Umdat al-Salik (Reliance of the Traveler), certified as “reliable” by the Misunderstanders of Islam Al-Azhar University in Egypt:

“Circumcision is obligatory (O: for both men and women. For men it consists of removing the prepuce from the penis, and for women, removing the prepuce (Ar. bazr) of the clitoris (n: not the clitoris itself, as some mistakenly assert). (A: Hanbalis hold that circumcision of women is not obligatory but sunna, while Hanafis consider it a mere courtesy to the husband.)” — ‘Umdat al-Salik e4.3

Regional variances of the practice in Muslim communities depend just as much on the justification of the principle in Islamic law. Those who would defend “just a little” cutting as somehow more acceptable — including the American Academy of Pediatrics, with their approval of a “ritualized nick” (background and commentaryÂ here andÂ here)– miss the point: Mutilation is mutilation, and must not be allowed to happen onÂ U.S.soil. Period.

“Pressure for female genital cutting lingers in theÂ U.S.,” by Stephanie Chen for CNN, May 21:

(CNN) — Fatima Mohamed, a 45-year-old Somali immigrant living in America, was faced with a question most parents will never worry about: Should my daughter be circumcised?

The United States has outlawed female genital cutting, but cultural and religious pressures to circumcise girls linger among some African and Muslim immigrant families. Mohamed says the decision was an easy one for her to make after going through the painful experience herself in Africa as a child. She strongly opposes the idea of cutting her 11-year-old daughter, an American-born Somali with long curly hair, who plays soccer and likes watching “American Idol.”

But not every family in her African community in Massachusetts feels that way. Nor can they they swiftly make the decision to reject circumcising their daughters, because it’s a cultural ritual integral a woman’s identity, she says.

“They say they don’t want to hear it,” Mohamed says. “Some think I’m disrespecting my own culture. Some will say, ‘You act like an American now. You forgot about who you are.’ “

In theÂ U.S.,Â an estimated 228,000 women have been cut — or are at risk of being cut — because they come from an ethnic community that practices female genital cutting, according an analysis of 2000 Census data conducted by the African Women’s Health Center at Brigham and Women’s Hospital. The Census reports there are roughly 150 million women living in the United States.

There are several types of female circumcision. The most severe types require the inner or outer labia to be sewn together, a procedure performed in parts of Somalia and Egypt. Other forms include excising the entire clitoris or part of the clitoris.

Genital cutting dates back at least 5,000 years, says Marianne Sarkis, a professor of international development at Clark University in Worcester, Massachusetts. Some women desire the procedure because they believe they are dirty or unmarriageable if they are not cut, she said. There are cultures that begin cutting women as early as infancy, while some wait until adolescence.

Not all families in communities where female genital cutting is commonplace will want to participate. In Mohamed’s immigrant community in Massachusetts, families are divided, she says. Some refuse to allow the procedure, as she does. Others say they want it, and many remain silent.

Occurrences of the practice have been documented in theÂ U.S.Â In March, a Georgia mother was charged with female genital mutilation after the father noticed an infant’s genitals “appeared to be have been circumcised,” according to the Troup County Sheriff’s Office. Officers wouldn’t comment further on the family.

Several advocacy workers say the more common scenario involves sending girls back to their home country to have the ritual performed. Over the past few years, Taina Bien-AimÃ©, president of the women’s advocacy group Equality Now, has heard several anecdotal stories of girls being sent back to have the procedure.

With summer vacation approaching, one 34-year-old mother from Senegal, living in New York City, says she knows several African families in limbo about genital cutting. One of her female friends abandoned her husband earlier this year when he asked for their 6-year-old daughter to be cut in Africa this summer. The friend, who speaks little English and is jobless, fled to a shelter with her daughter….

There is no compromise with barbarism, only surrender

If it’s all right to mutiltate girls for the greater good, what else might be excused?

The review by a prestigious US medical academy of its policy on female genital cutting has triggered a storm of protest from lobbyists, women’s groups and feminist bloggers.

‘’Have you all gone nuts?’’ one paediatrican demanded of the academy’s bio-ethics committee in a website exchange.

‘’Just a little female circumcision? There’s no reason to do this procedure and to condone any form of it is not acceptable.’’…

The offence was not caused by the committee’s final recommendations, which endorsed the academy’s previous opposition to female genital cutting, last reviewed in 2007.

Rather, the outrage was invoked by the committee admitting in its report the quandary of some paediatricians who argue thatÂ offering a form of ‘’ritualistic genital nick’’ might help dissuade families from taking their daughters overseas where they would be more likely to undergo life-endangering surgery and mutilation.

As each month goes by, it becomes clearer that we’re seeing precisely what Raspail described nearly 40 years ago in his prophetic masterpiece – a novel so prescient today, when for Europe it’s almost too late: 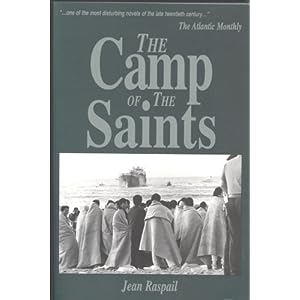 2 thoughts on “Horror in the U.S.: 228,000 women have undergone or are at risk for female genital mutilation”