Abolishing the Universal Declaration of Human Rights to replace it with sharia.

Replacing the U.S. Constitution Â & the Bill of Rights With Sharia.Â America now has a White House that is fully shariah-compliant.

Diabolical. Is the West simply too dumb or ignorant to even notice? Â This is bloody scary stuff. And comrade Hillary is not the only one peddling OIC doctrine and preparing us for the caliphate.

Whitewash in the White HouseÂ  (GoV) 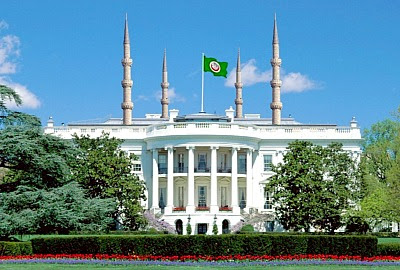 Â The Organization of Islamic Cooperation is six years into a ten-year jihadÂ against what it calls “Islamophobia”. It has set up an Islamophobia Observatory Â (with a war-chest of over $ 100 million dollars)Â to keep an eye on those who oppose Islam, and issues both quarterly and annual reports on the progress of its work.Back in June the foreign ministers of OIC member states met for a three-day session in Kazakhstan and hammered out a series of resolutions which were published as“Resolutions on Legal Affairs Adopted by the 38th Session of the Council of Foreign Ministers (Session of Peace, Cooperation and Development) Astana, Republic of Kazakhstan) 28-30 June 2011”Â [pdf]. As you can imagine, this document is a dreadful load of deadly-dull bureaucratic boilerplate, and very handy bedtime reading for insomniacs.However, the first resolution â€” Resolution No.1/38-LEG on the follow-up and coordination of work on human rights â€” is worth a look, particularly items 7 through 10, pages 4-5 (my italics):

There are a few things to notice in these items:

All of this is straightforward, and what we expect from the OIC. What has changed in the last year or so is the willingness of the United States to accept the OIC’s requirements on the “defamation of religions” and attempt to implement them through the UN, doing an end run around the First Amendment.

So how is the Obama administration doing? What kind of report card will it get from the OIC? Based on the document below, Barack Hussein Obama is a candidate for the honor roll.

A document entitledÂ “Empowering Local Partners to Prevent Violent Extremism in the United States”Â [pdf] was released earlier this month by the White House. Once again, this is pretty dull reading â€” the usual useless claptrap that we’ve come to expect from the federal government over the last ten years about how it plans to fight “terrorism”. It was bad enough under George W. Bush, but it has gotten worse under the Light-Bringer.

Before I quote anything from this confection, let’s analyze some of the word usage in it.

4 thoughts on “The OIC Forces the 'Cairo Declaration of Yuman Rites' on Unsuspecting EUro Dhimmies & the U.S.”