Four dead and dozens injured after blasts in Belgian city

A lone Muselman brought bloodshed and mayhem to the eastern Belgian city of LiÃ¨ge today, killingÂ Â (four) people in a frenzied attack during which he lobbed hand grenades and fired an assault rifle into crowds of shoppers and commuters. (source)

Not many details as of yet, but the Telegraph notes a link to an honor killing case that could indicate that this was yet another act of violence by Misunderstanders of the Religion of Peace. “Belgium grenade attack leaves at least two dead,” from theTelegraph, December 13 (thanks to JW): 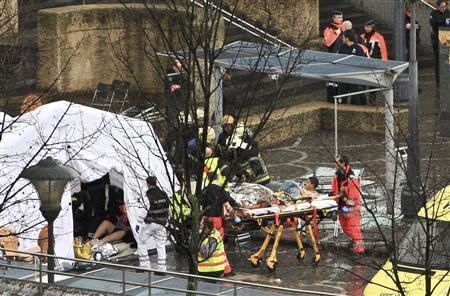 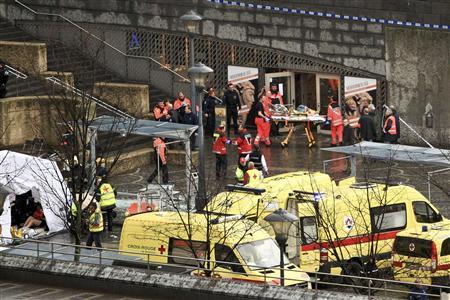 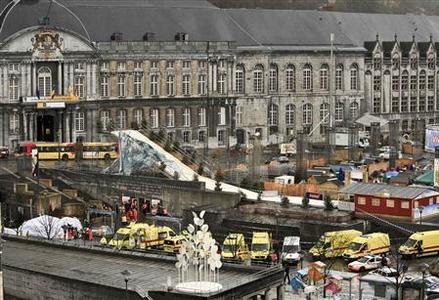 1 of 3. Rescuers evacuate injured people at the Place Saint Lambert square where two men threw explosives in the city center of the Belgian city of Liege December 13, 2011.

At least one person was killed and up to 47 others wounded Tuesday when up to four grenades exploded outside the main courthouse in the eastern Belgian city of Liege.The attack took place around noon on Saint-Lambert square, home to the town’s courthouse and located near a busy Christmas market, Belga news agency said.

A two-year-old child is reportedly fighting for life in hospital. Six other victims are said to be gravely injured.

One of two or more assailants threw stun grenades into the courthouse while another was hurled at a bus shelter, RTL-TV1 said.

Shots were fired across the square by gunmen posted on the rooftop of a bakery shop, with further shots heard later from across town.

Police cordoned off the square and gave chase to the assailants, one of whom was reportedly killed. The gunmen are thought to be hiding in Liege cathedral.

The Karachi Post in Pakistan claimed that the attack was linked to a sentence in an honour killing case. It said the parents of Sadia Sheikh were sentenced on Monday when there had been a bomb alert in the court.

Gaspard Grosjean, a journalist for La Meuse Liege on the scene, told The Daily Telegraph there was panic and confusion on the streets of Liege.

“There is at least one dead and the attacker. Police are looking for another shooter. There are lots of ambulances and many casualties – at least 10 people.

“At the moment you can’t move in the city centre. People are crying and in shock – they do not know what is going on. Everyone has been told to stay inside and are hiding in shops.”…

UPDATE:Â One of the attackers was namedÂ Nordine Amrani. (Thanks to Robert for the link.) This is a Muslim name. Nordine = nur deen, light of the religion, and Amrani is related to Imran, the father of Moses according to the Qur’an (cf. sura 3, “The Family of Imran,”Â ahl-e-Imran).