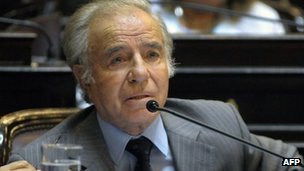 Former Argentine President Carlos Menem is to stand trial for allegedly obstructing an investigation into an attack on a Jewish cultural centre in Buenos Aires, officials have said.

Argentina blamed the Lebanese militant group Hezbollah for the 1994 bombing, which killed 85 people.Â But prosecutors say evidence indicating the involvement of local accomplices in the attack was covered up.

No-one has ever been convicted of the car bombing.

The attack on the Argentine Jewish Mutual Association took place on 18 July, 1994, during Carlos Menem’s first term in office as president.

Argentine prosecutors said Iran planned and financed the attack, and that a Hezbollah cell carried it out.

The prosecutors say there is evidence that the Argentine intelligence services and security forces helped cover up the tracks of local accomplices of the attackers.

Mr Menem was initially accused of a cover-up in 2009, but has never faced trial.

So too have the former heads of the intelligence service, Hugo Anzorreguy and Juan Carlos Anchezar, and two commanders of the federal police.

The federal magistrate in charge of the case, Ariel Lijo, said Mr Menem overstepped the powers accorded by the constitution and local laws.

In his statement, the magistrate said that Mr Menem -Â the son of Syrian immigrants –Â put pressure on Mr Galeano to abandon inquiries into the possible involvement in the attack of a Syrian-Argentine businessman, Alberto Kanoore Edul.

The mere mention of South America can conjure up visions of tall spires and stately steeples bedecking the enchanting and somewhat mysterious landscape of the continent. A common bond of Catholicism runs through the skein of South American countries that have emerged over the last century. It is no wonder then that one might typically perceive this region as a “baptized continent,” devoid of any significant Islamic influence or presence. And even if the observer were to recognize the survival of some smattering of Islamic communities today, the palpable perception might be to leave them to their inevitable fate as geographic, economic, linguistic and religious minorities.

But the continent that is home to the Amazon and its splendors, the Piranha, the Andes, Carnival and some of the best bred cattle in the world, holds a few more surprises for those too myopic to look beyond the exotic. And the Muslim presence in South America is indeed a surprise.

The original influx of Muslims to South America took place in the 1850’s and 1860’s. Syrians and Lebanese who felt persecuted in their homelands or who were economically destitute moved to the greener pastures of the sparsely populated continent. After the turn of the century, the demise of the Ottoman Empire and the Palestinian diaspora forced Muslims from those areas to seek safer havens. A large percentage of this oppressed and deprived populace planted their roots in South America’s large and fertile valleys. These immigrants were generally farmers or merchants who toiled hard to improve their economic fortunes. Their descendants continue to toil to eke out a living, and to retain some semblance of cultural and religious cohesion.

Buenos Aires, a city of eleven million inhabitants was the last major outpost of European colonizers in the Southern Hemisphere. Its wide boulevards, rectangular streets and innumerable churches testify to the fact that the architecture and fiat of the Vatican have ruled supreme in this land. But amongst these teeming millions of Catholics lives a community of perhaps 160, 000 (over 3 million by unofficial count) Muslims.

One needs to look no further than the small but elegant mosque standing on Calle Alberti in the city’s center to understand the manner in which the Buenos Aires’ Muslim community strives for cohesion in a land of crucifixes and bell towers. “We have been here for 17 years,” says Abdel Kareem, who is the mosque’s Muezzin (the person who vocalizes the daily call to prayer) and runs a small restaurant adjacent to the mosque. “When it was built, only a few people came, but now we are blessed to have a large and regular congregation”.

According to Kareem, when his parents emigrated from Syria in 1920s, there were no mosques to be found. Like other immigrants, Kareem’s parents imparted Islamic teachings to him and his five brothers at home. But in the absence of an organized Muslim community, it was only a matter of time before some such children began to be swayed by the religion and culture of the dominant society.

A majority of Argentine Muslims today barely make a living. The continuous sub-division of tractable land amongst the immigrants’ offspring, and the recessions that the continent has endured, has left indelible scars on the once prosperous farming community of Muslims. The few individuals that have prospered would risk the ire and scorn of high society if it were known that they followed Islamic precepts. Many of these Muslims reserve the practice of their faith for times of death or celebration, and do so within the sanctuary of their homes. Kareem remembers how his teenage friend and fellow Sunni Arab, Argentine President Carlos Menem, slowly turned away from Islam.

“Menem wanted to move on to higher things and the burden of Islam was too heavy for him,” says Kareem. “He had to renounce Islam and become Catholic to be President.”

According to Kareem, Zulema Fatima Yoma, the former wife of Menem, visits her Muslim relatives very discreetly, lest it be known that she and her daughter have any ties with the Muslim community or to Islamic observances.

Kareem strongly believes however that his old friend Menem, with whom he has not communicated for over two decades, is still a Muslim at heart.

“When Menem’s only son died four years ago, I was personally requested to give him a Muslim ‘Ghusal’ (the ritual burial cleansing) and he was buried according to Muslim rites in an Islamic cemetery,” says Kareem.

As further evidence of Menem’s Islamic ties, Kareem also points to Menem’s decision to donate to the Muslim community, an expansive piece of real estate in Buenes Aires’ diplomatic quarter of Palermo, a region known for its lush greenery and choice real estate.

But Muslims in Argentina are not only confined to Buenes Aires. The official count puts the Muslim population at approximately 700,000, spread throughout the country; but with particularly strong numbers in Cordoba, Mendoza, Tucuman and Rosario. However according to Kareem there could be about nine to ten million denizens of Argentina’s population of 34 million that are either Muslims or who have Muslim ancestry.

Arab immigrants did not settle in Argentina, alone. Brazil opened its arms to many Muslim immigrants as well. It is therefore no surprise that Muslims reside from Brazil’s borders with Paraguay and Argentina to Manaus in the Amazon. The biggest concentration of Muslims however is found in the greater Sao Paulo region, which is presumed to be home to approximately 500,000 Muslims.

The Muslim influence in Brazil is widespread. Perhaps seventh of the population is of Arab descent and names of Muslim/Arab origin are prevalent. Architecture and cuisine also bear the trademarks of the culture brought to the hemisphere by the Arabs. Not even fast food has escaped the immigrant influence, as the largest fast food chain in Brazil is “Habib’s” which serves Arab food. And the diversity of influence stretches to businesses such as the textile industry, which is dominated by Arab merchants. The Sao Paulo city council even has a Muslim Councillor by the name of Mohammad Murad, who is a lawyer by profession.

But despite the infiltration of Arab culture in Brazil, Islam as a religion has failed to remain as robust. Like their brethren in other parts of South America, early Muslim immigrants lacked the counsel or vision to realize that the establlishment of schools, mosques and social centers would be crucial in the retention of the Islamic character in later generations. As a result of this lack of foresight, second and third generation Muslim immigrants slowly drifted away from the religion of their forefathers. Only recently has Islam begun to rebound. A number of mosques dot the greater Sao Paulo area. The oldest and most popular of these is found on Av. Do Estado. Since its establishment 70 years ago, the mosque has added a Quranic school, a small library, a large kitchen and meeting hall for various functions. But despite its popularity, the Av. Do Estado mosque has suffered from a dearth of religious leadership.

As has been the case in many of the larger metropolitan mosques in South America, foreign assistance and individual effort have played major roles in the sustainability of the mosques in the greater Sao Paolo area.

For example the Imam of the Av. Do Estado Mosque is from the Middle East and often times Imams are chosen jointly by the Mosques’ management committees and the Arab governments that pay for the Imam’s services. While such support is sorely needed amongst South American Muslim communities, the prevalence of this foreign assistance signifies that the majority of Muslim communities do not have the educational infrastructure to produce an indigenous religious leadership. However, some of the local Muslims are making an effort to reduce this reliance on outside aid.

Ismail Hatia, a South African who came to Brazil in 1956, built a mosque in Campinas two years ago. Hatia, who also runs a language school, felt that the approximately 50 Muslim families in Campinas were in dire need of some community organization to help provide cohesion and direction for Muslims, especially the youth who have been lured away from Islamic practice by the attractions of the dominant culture.

The Campinas mosque now holds regular Friday congregational prayers and is in the process of establishing regular night prayers on Monday, Tuesday, Friday and Saturday. The mosque is currently in need of a full time Imam whose salary would be paid for by the Saudi Arabian government.

“We do not want to ask for donations as it could drive away some Muslims who have just started to come to the mosque,” says Hatia. “At the end of the month, two or three people, including myself, just pay the bills that come due.”

Despite the obstacles, this small community and many others throughout South America continue with endeavors to bring people back into the fold of Islam. And South American Muslims are indeed resurfacing after decades of hibernation. They are rediscovering their identity and forging unity and cohesiveness amongst their scattered communities; communities which, some day, could carry weight in social and political structures.

For more information on Islam and Muslims in South America please visit the Islamic Association of Latin America website at www.islamerica.org.ar.

3 thoughts on “Don't cry for me Argentina….”