Unfortunately for all of us, the British Royals are in on this.

In his latest essay, Paul Weston examines the ongoing process of Islamization in Britain as realized through the financial subversion of its universities by the Saudis and other wealthy Muslim donors.The British once built glorious structures in our varied colonies and did so in order to project imperial power architecturally. But after we retreated within our own borders and invited in the Third World, so we in turn are now subjected to foreign statements of imperial power. This is very apparent in the ancient university city of Oxford, home to the massive Oxford Islamic Centre. 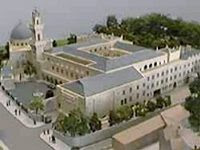 This building occupies the majority of its three-acre site and appears to have been constructed slap-bang in the middle of the colleges’ sports fields. The dreaming spires of Oxford have some serious competition here â€” the architectural projection of Islamic supremacy simply has to be seen to believed (go to Google maps and enter “Kings Mill Lane, Oxford.” The lane serves as the northern border of the site).
The Oxford Islamic Centre gained Royal approval recently, a landmark event celebrated by Prince Charles, a noted admirer of Islam who is apparently impervious to the reality of Islam’s core tenets. The Islamic centre, built at a cost of some Â£75 million, was funded by a number of hard-line Islamic states, most notably Saudi Arabia.Between 1995 and 2008, eight universities â€” Oxford, Cambridge, Durham, University College London, the LSE, Exeter, Dundee and City accepted more thanÂ£235 millionÂ from Muslim rulers and those closely connected to them.

The donors tell us the Islamic Centres of British Universities merely want to promote an understanding of Islam, but Prof Anthony Glees, a man who has studied the rise of Islamic extremism in our universities, suggests their real agenda is rather different. He argues that they promote an extreme ideology and act as a form of propaganda for the Wahhabist strain of Islam within universities. They push, he says,Â “the wrong sort of education by the wrong sort of people, funded by the wrong sorts of donor”.

Saudi Arabia has spent around 90 billion petro-dollars funding the growth of hard-line Wahhabist ideology in the West, yet Saudi Arabia is also a country that bans crosses, Bibles and any Christian teaching within its borders. Our much vaunted multicultural tolerance seems to be just a one way street to oblivion. Or, to put it more bluntly, we are being played for Dhimmi fools.