Dempsey, what a dipstick:

“I don’t want to be complicit if they [Israel] choose to do it,” he added.

Complicit? He makes it sound as if it would be a crime to rid the world of the genocidal scourge of the Iranian nuclear program. It is no surprise that Dempsey is the clown whoÂ assured Leftists and Islamic supremacistsÂ that material “offensive to Islam” (truth and accuracy were not criteria) would be purged from military training resources. “U.S. Gen. Dempsey: ‘I don’t wish to be complicit in Israeli strike,’” from theÂ JTA, August 31:

Doing nothing is being complicit. Â Its also stupid.

But hey: this is the age of Obamunism.

The message that the U.S. conveyed to Iran via the most sensitive secret channels is unequivocal: if Israel attacks, we won’t stand behind her and we won’t be drawn into war.

TheÂ complete textÂ of Ayatollah Khamanei’s speech to the NAM summit is online, and it has some doozies: 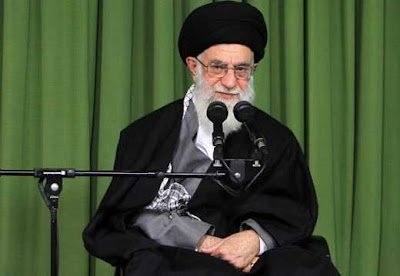 The UN Security Council has an illogical, unjust and completely undemocratic structure and mechanism. This isÂ a flagrant form of dictatorship, which is antiquated and obsolete and whose expiry date has passed. It is through abusing this improper mechanism that America and its accomplices have managed to disguise their bullying as noble concepts and impose it on the world….Torture and assassination are permissible and completely ignored if they are carried out by America, the Zionists and their puppets.

…The U.S. and its Western allies have armed the usurper Zionist regime with nuclear weapons and created a major threat for this sensitive region. Yet the same deceitful group does not tolerate the peaceful use of nuclear energy by independent countries, and even opposes, with all its strength,the production of nuclear fuel for radiopharmaceuticals and other peaceful and humane purposes.Â Their pretext is fear of production of nuclear weapons. In the case of the Islamic Republic of Iran, they themselves know that they are lying, butÂ lies are sanctioned by the kind of politics that is completely devoid of the slightest trace of spirituality.

And spiritual people like Khamanei wouldn’t lie, would he? I mean, the thousands of centrifuges being built underneath mountains are for medicine, right?

…The summary of this matter is that on the basis of a horrible Western plot and under the direction of England in the 1940s,Â an independent country with a clear historical identity called “Palestine” has been taken away from its peopleÂ through the use of weapons, killings and deception and has been given to a group of people the majority of whom are immigrants from European countries.

…Political and military leaders of the usurping Zionist regime have not avoided any crimes during this time: from killing the people, destroying their homes and farms and arresting and torturing men and women and even their children, to humiliating and insulting that nation and trying to destroy itÂ in order to digest it in the haraam-eating stomach of the Zionist regime, to attacking their refugee camps in Palestine itself and in the neighboring countries where millions of refugees live.

Apparently, Khamanei wants all non-kosher restaurants in Tel Aviv to close down.

Even now after 65 years the same kind of crimes marks the treatment of Palestinians remaining in the occupied territories by the ferocious Zionist wolves.

Doesn’t he mean aÂ crossbreed between wolves and pigs?

Now I would like to give a benevolent piece of advice to American politicians who always stood up to defend and support the Zionist regime. So far, this regime has created countless problems for you. It has presented a hateful image of you to the regional peoples, and it has made you look like an accomplice in the crimes of the usurping Zionists. The material and moral costs borne by the American government and people on account of this are staggering, and if this continues, the costs might become even heavier in the future.

If the leaders of Iran would kill themselves and democratic elections would follow, the US would saveÂ even more money!

Israel’s Right to Exist Not Based Upon UN Resolution

“Jewish rights to the Land of Israel are steeped in four millenia of facts. The right to re-establish a country on the entirety or any portion of this land stems from writ and deed, and from the continual presence of Jewish communities dwelling in the land throughout the epochs. Living descendants of these die-hard, holdout communities are firm links in the chain of generations, and proffer irrefutable proof. Every archaeological Tel and architectural artefact testifies to the truth. All remnants and ruins bear witness. Relics substantiate and place-names verify.”