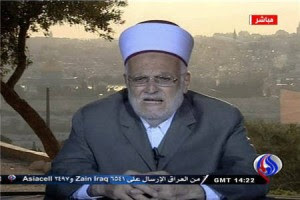 You see, the tunnels they have been excavating nearby (he claims, underneath) aren’t meant to destroy the mosqueÂ directly. Rather, those wily Israelis are setting up a situation where an earthquake of only 5.0 on the Richter scale will cause the structures on the Temple Mount to collapse on their won, and then the Jews can blame the earthquake!

Sabri has, in the past, hasÂ stated:

“Six million Jews dead? No way, they were much fewer. Let’s stop with this fairytale exploited by Israel to capture international solidarity. It is not my fault if Hitler hated Jews, indeed they were hated a little everywhere. Instead, it is necessary to denounce the unjust occupation endured by my people.”

“Anyone who studies The Protocols of the Elders of Zion and specifically the Talmud will discover that one of the goals of these Protocols is to cause confusion in the world and to undermine security throughout the world.”

Which means that according to analysts asÂ smart as Karl Vick, Sabri is a moderate.