Because if we all become vandals like you, your mosques might just go up in smoke, and you and your hijabbed little sisters might have some Â strange encounters with spray cans. And you won’t be asked which psychedelic colours you prefer:

The Grunard, long in the hands of Stalinist revoluzzers & rabid Islamo-spokesturds, offers a soapbox to Mona Eltahawy, herself an Islamofascist vandal, Â yet to be sentenced:

If anti-Muslim ads are protected, so must be my free speech right to protest

Well yes; protest all you want. Just don’t engage in violence and vandalism. What is it you don’t understand about that, Mona?

“I support freedom of speech â€“ even Pamela Geller’s right to her Islamophobic subway posters. But I will always challenge hate.”

NO you don’t. As an Islamo-supremacist you wanna do away with free speech. And no, you are not “challenging hate”, Mona: you been sucking the hate in with the mothers milk, like all fanatical, brainwashed Islamo-zombies you don’t even realise your own hypocrisy. 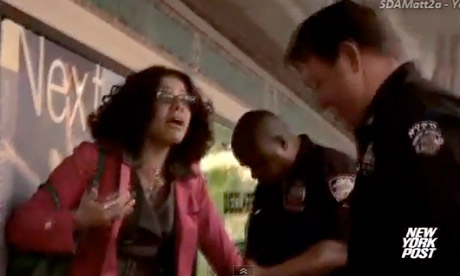 Mona Eltahowitzer being arrested for her NYC subway protest against anti-Muslim posters.

Five days afterÂ I spraypainted over a racist and bigoted advertisement in the New York subway, a man set fire to my brother’s local mosque. He struck just a few hours after the mosque’s kindergarten had been filled with children at Sunday school, including my four nieces and nephews.

It was a coincidental correlation but there was nothing casual about either the hate speech on the walls of the subway â€“ which a judge declared “protected political statement” â€“ or the arson in Ohio, which was described as an “act of terrorism” by officials who announced federal hate crime charges against the suspect.

American rightwingers â€“ in between calling me a “bitch” and “cunt” countless times â€“ would have you know I’m an “Islamo-Nazi anti-speech ungrateful immigrant” incapable of appreciating the wonders of the first amendment. The right is incredibly deft at getting earnest about all the wrong things. It was precisely my love of the first amendment that made me join sidewalk activists in 2010 to support an Islamic community center’s right to open in Lower Manhattan. As a member of a minority whose very presence has been considered an offense â€“ “Why can’t you just move a few blocks away? Can’t you see you’re hurting our feelings?” â€“ of course, I believe in the right to offend: it’s a two-way street.

A bag of dogshit was left at the doorstep of Park51, a car circled the building and ourÂ protestÂ with a decommissioned missile mounted on its roof, and Tea Partiers often visited the protest to pick arguments.

When I first heard about those subway ads, Park51 immediately came to mind. Pamela Geller connects the dots of hate, determined to mine the depths of American ignorance to once again bully Muslims and Arabs. Her group,Â Stop Islamization of America, was behind attempts to shut down Park51, calling it the “Ground Zero Mosque”. Her recent subway ad, paid for by her anti-Muslim American Freedom Defense Initiative, conflates “savage” (a heinous word loaded with a dehumanizing and bloody history in this country; ask blacks and Native Americans) with Palestinian/Muslim/Arab and with “Jihad”.

All of us are lumped together on one side, and Israel is assumed to be the antithesis of all those things on the other: the good, the civilized, the only choice in the face of our “savagery”. The ad reads:

Between two Stars of David, it adds:

Resist the disingenuous argument that she’s speaking out against “Jihad” and notÂ Islam. When Islamophobes in Europe â€“ Geert Wilders and the English Defense League â€“Â unite to come to visit GellerÂ and meet with mainstream Republican heavyweight such as Andrew Bolt and Newt Gingrich, you must understand it is for the purpose of vilifying all Muslims.

I received my first death threat after I condemned Yale University Press for pulling theÂ now-notorious Jyllands-Posten cartoonsÂ of Prophet Mohammad from a book it was publishing on the crisis. I supported that newspaper’s right to run those cartoons, which offended so many.

If I wanted to block the Geller ad’s hate speech, I would have given it the NYC treatment that I witnessed just two hours before I spraypainted it. A man in a suit who introduced himself as “Morgan” very casually ripped â€“ not once but twice â€“ one of the ads on 49th Street Station.

“This is fuckingÂ New YorkÂ City. It’s unacceptable,” he told a camerawoman who caught it all. The media had learned to go to the ads, anticipating problems: several had had “Racist” and “Hate speech” stuck on them as soon as they appeared.

So, if I’d wanted to “block” or “shut down” free speech, I would’ve gone to Time Square station with black spraypaint. Or even easier, I would’ve just ripped them, Morgan-style. Instead, I chose pink. Pink matched my coat, and pink was the least violent colour there was. Pink was see-through, even. I’d actually planned on spraying “RACIST” across the ad, but I realised with the first spray that it was much harder to get the can to behave. I will be taking up offers for lessons from NYC and Cairo taggers, and next time take a stencil with me.

First, I told several friends that I would probably get arrested. I was fine with getting arrested. I can’t stand bullies and Geller is a bully with deep pockets. I had no idea so much media would be there, nor that a Geller supporter would add to the spectacle by thrusting her body between me and the vile ad.

I wanted to use my profile as a commentator to test “protected speech”: if hate speech is protected, is my protest at it also protected? And if not, why not? What if the choice on the ad were reversed: “Choose Jihad. Defeat Israel.” What if the ad vilified African Americans, or Jews, or any other group for which public denigration is less permissible?

Banning hate speech doesn’t end racism or antisemitism. Social pressure does that. It becomes socially unacceptable. To get to that level of unacceptability, we must stand up to hate-mongers like Geller. Clearly, not enough of us are doing so ifÂ hate crimes against Muslims in the US tripled in 2010-2011.

We seem to have arrived in some crazy Alice in Wonderland world where aÂ woman is willing to use her body to “defend” hate speech. Pamela Hall, I realised later, is to hate speech what Judith Miller, the once-renowned New York Times reporter, became to protecting sources. Pamela Hall was a human shield to hate, Judith Miller went to jail rather than reveal her source. But her source wasn’t an endangered whistleblower. Rather, it was Scooter Libby, a Dick Cheney aid who helped blow the cover of CIA agent Valerie Plame.

As I said, the right is earnest about the wrong things. Too many on the left are earnest about nothing at all, sadly. They’ve been rendered spineless by snarkiness â€“ not least on Twitter. I’m the first to admit that Twitter helped tremendously after I wasÂ beaten and sexually assaulted and then detained by Egyptian security forcesÂ last year. But it is the height of spinelessness to just hashtag our objection to ads that are promoting hate in the public square, seen by millions in the subway every day.

A Muslim woman spray painting a hateful ad in pink was also, for me, the antidote to the tired clichÃ© of “Muslim rage”. My inbox was flooded with racists and bigots lecturing me about how America works. But equal numbers of young Americans also contacted me, wanting to join in future acts of civil disobedience.

I broke the law, yes. So what?

I broke it to make a point of principle. Eleven years after the 9/11 attacks, American Muslims are still being bullied and vilified.

AÂ mosque in Joplin, Missouri, was burned to the groundÂ in August, just over a month after an attempted arson at that same Islamic center. Another Islamic center, inÂ Murfreesboro, Tennessee, endured years of legal wrangling, vandalism, bomb threats and anti-Muslim sentiment since planning commissioners granted approval in 2010 for an expansion project at the existing mosque.

Jewish and Christian groups have paid for counter-ads that will hang next to Geller’s hate speech and theÂ MTA has modified its advertising standards. I have no idea if any of those initiatives was inspired by my protest; several others also defaced the hate posters with stickers. Veteran civil liberties activist Sherry Wolf and three 19-year-old students joined me in a holding cell for several hours after they did so.

I’m convinced that bullies need to know that Muslims will give them the finger. I deliberately didn’t spray or hit Pamela Hall because I didn’t want my protest to be about assault or violence. I gave the finger to the Tea Party during the Park51 protest, and spraying the poster was my way of doing the same to Pamela Geller.

Pink is for protest and not princesses. Pink is for my nieces, especially. They will not grow up to be scared or apologetic for being Muslim, or Egyptian, or brown. That refusal to be intimidated by bullies is the message I take again and again from young Muslims who have written to me. Many were just 10 or 11 when 9/11 happened, and they refuse to apologise for something they had nothing to do with. Why should they?

The only hashtag I will consider isÂ #ProudSavage.

One thought on “No Mona: Vandalism is not free speech”