Bosnian mujahid in Syria: “We came to fight the Jews and liberate Jerusalem”

“We Â aim towards Jerusalem. We want to fight the Jews.”

“We are Muslims. We want to save mankind from villains and their evil. So we know why we came from and the future road waiting for us. … We came to fight Israel and and eliminate them.”– from the Elder 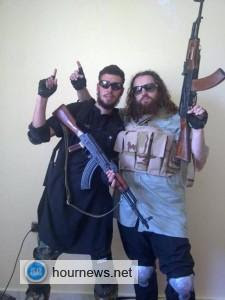 Arabic mediaÂ has anÂ interviewÂ with Bayrou Janovic, a convicted Bosnian terrorist who came to Syria after four years in prison for his role in a bombing.

He says that he came to Syria because he saw similarities between what was happening there and the Bosnian war. When asked about rebels who tortured a prisoner to death in a particularly gruesome way, he brushed that aside by saying that Syria is worse.

Janovic adds, “We came to establish the rule of God on earth. Our goal here does not stop, [after Assad is defeated.] We will aim towards Jerusalem. We want to fight the Jews.

“We are Muslims. We want to save mankind from villains and their evil. So we know why we came from and the future road waiting for us. … We came to fight Israel and and eliminate them.”

Today’s Arab Muslim antisemitism is brought to you by Syria

They may have other problems, but its always a crowd-pleasing idea to get back to the basics ofÂ attacking Jews:

Following are excerpts from a sermon at the Umayyad Mosque in Damascus, which aired on Syrian TV on June 28, 2013.

Syrian preacher:Â Let us take a look at the history of mankind, which has recorded the true nature of the Jews, the slayers of prophets and violators of agreements. It shows how they have tried, since pre-Islamic times, to fragment, divide, and rip apart the Arab and Islamic nation.–More Â Jew-hatred from MEMRI thanks to the Elder…..

He said the religion of Islam itself is not inherently hostile to Jews, and Muslim Antisemitism scarcely existed before the establishment of the state of Israel. —Pipes is wrong. Totally wrong.

Krauthammer also doesn’t get it. Not even close:Â (Read the full article)

Masked gunmen open fire at Port Said churchÂ  (they always do that when no Jews are available….)

Masked gunmen opened fire at Mar Mina Church in Port Said’s al-Manakh early Tuesday and managed to get away, according to state-run news agency MENA. No casualties were reported.
Army and police squads arrived at the scene of the attack and efforts are being undertaken to identify the perpetrators.
This is the third such attack in 24 hours. Yesterday, unknown attackers assaulted Port Said’s western seaport and the province’s traffic police department.

These are the people that Europe and Obama supports in Egypt and Syria.
.
And here they hack 4 kids dead and throw them off a tall building in Alexandria, Egypt: