Links from Breitbart & GWP
.
‘Either You Convert to Islam, Or You Will Be Beheaded’
.

The village of Maaloula has been taken over by Syrian rebels associated with al Qaeda, who have stormed the Christian center and offered local Christians a choice: conversion or death. A resident of the town said the rebels shouted “Allahu Akhbar” as they moved through the village, and proceeded to assault Christian homes and churches.

Sounds almost like the “tiny minority of excremists” we keep hearing about…..

Â
Rapper: If Obama Hits Syria, US ‘Will Never Have Another Black President’
.

Â Which is not necessarily a bad thing….. 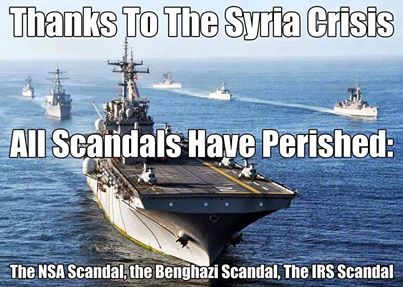 Natural Born Criminals:
Â
If they haven’t impeached him by now, they never will:
.

Obama can’t seem to find the funds for our military (the only constitutional responsibility of the FederalÂ government). However, Obama has no problem finding tax payerÂ funds for the numerousÂ lavish vacations, for IRS agent bonusesÂ and IRS abuses, the tax dollars wasted on portraits of EPA’s Lisa Jackson, $2.2 million to study Lesbian obesity, and other taxpayerÂ misuse of funds too numerous to mention.Â –

# Thanks toÂ Eretz ZenÂ & Mullah
Syrian Foreign Minister: “We are asking ourselves how Obama can…support those who in their time blew up the World Trade Center in New York”
.
I am asking myself the same question. “Syria: US strikes would help those who ‘blew up World Trade Center,'” by Albina Kovalyova and F. Brinley Bruton forÂ NBC News, September 9: (JW)
.
Syria: Muslims break into Christian homes, murder three Christians
.

Good thing we are rushing to the aid of these people, eh? The jihadists, that is, not the Christians.
.

U.S. Army waging jihad on behalf of the MuBros?Â
.
It doesn’t get any dumber than that:

Muslim Brotherhood Sheikh Qaradawi favors U.S. strike in Syria: “Allah pits the oppressors one against the other”

AsÂ I said in June: “When we go into Syria, as Obama has now promised, we will be aiding the allies of this man.”

Qaradawi is the most popular and influential Islamic preacher in the world, and is the spiritual leader of the Muslim Brotherhood.

Qaradawi was on the Board of the Islamic Society of Boston, as I pointed out at Jihad WatchÂ back in March 2004. If anyone in Boston had been paying attention to the implications of that fact back then, the Boston Marathon bombings may never have happened.

Qaradawi is a vicious Jew-hater. He hasÂ said on al-Jazeera: “Throughout history, Allah has imposed upon the [Jews] people who would punish them for their corruption. The last punishment was carried out by Hitler. By means of all the things he did to them – even though they exaggerated this issue – he managed to put them in their place. This was divine punishment for them. Allah willing, the next time will be at the hand of the believers….”

Qaradawi continued: “I’d like to say that the only thing I hope for is that as my life approaches its end, Allah will give me an opportunity to go to the land of Jihad and resistance, even if in a wheelchair. I will shoot Allah’s enemies, the Jews, and they will throw a bomb at me, and thus, I will seal my life with martyrdom.”

“Leading Sunni Scholar Qaradhawi in Favor of U.S. Strike on Syria: Muslims Cannot Do It, So Let the Oppressors Fight One Another,” fromÂ MEMRI, September 6:

Following are excerpts from a Friday sermon delivered by leading Sunni scholar Sheik Yousuf Al-Qaradhawi, which aired on Qatar TV on September 6, 2013: