“If the U.S. dares to ‘put boots on the ground’ here, they need to know that we will blow them out of Syria,” said Mohammed

Gingrich: Obama ‘Following From Behind’

The “war of ideas is the primary arena of conflict,”

Not at all. Islam is the primary arena of conflict. And who areÂ ignoramusesÂ Jamestown Foundation Senior FellowÂ Stephen UlphÂ at theU.S. Capitol Visitors CenterÂ anyhow to lecture us on something they clearly cannot comprehend because they never studied the texts and tenets of Islam? 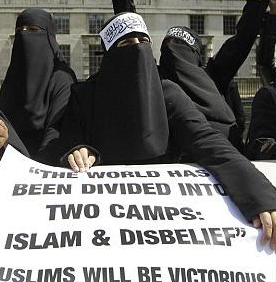 “…you have to be pious, be a positive role model.”—MoreÂ Â»

3 thoughts on “Moe huffs and puffs”