Good news: Iran only wants to kill millions of Americans, not all of them! 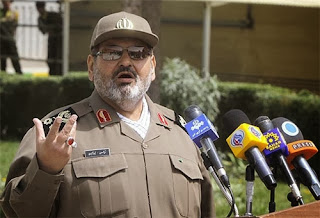 TEHRAN (FNA)- Chief of Staff of the Iranian Armed Forces General Hassan Firouzabadi underscored that the slogan “Death to the US” chanted by IraniansÂ is meant at the 1% capital holders and Zionist Americans ruling the world’s unjust system, and not the American people.

“The slogan “Death to the US” doesn’t mean death to the 99% of the US people,” Firouzabadi said, addressing a national meeting of police commanders here in Tehran on Monday.

“When we say “Death to the US”, we mean death to those one percent who are arrogant, capitalist and Zionist Americans,”Â he added.

See? They don’t want to murder 300 million Americans – only those that are arrogant, capitalist and who support Israel, which he estimates is only 3 million!

Good news:Read more from the Elder of Ziyon