Quran (8:12)Â -Â “I will cast terror into the hearts of those who disbelieve. Therefore strike off their heads and strike off every fingertip of them”Â

Kinshasa (AFP) – The bodies of at least 21 people have been found after a grisly attack in eastern DR Congo in which several women and children were raped, mutilated and beheaded, the UN peacekeeping mission said on Monday. (Continues below the fold)

SurahÂ 8. Al-Anfal, Ayah 7: Â cut off the roots of the unbelievers

Some 210,000 people have been uprooted from their homes by violence in the Central African Republic capital in the past two weeks alone, the United Nations said Tuesday.
.

And He caused you to inherit their land and their houses and their wealth, and land ye have not trodden. Allah is ever Able to do all things. Â (M. M. PickthallÂ translation)

“Life has become unbearable for our church members who have survived these attacks, and they are making worship services impossible.” But remember: the real problem is “Islamophobia.”

The UN mission MONUSCO said the victims, including a baby, were hacked to death in an attack of “extreme brutality” in a wave of violence in North Kivu last week.

A local civil society organisation blamed the rampage on the Muslim Ugandan rebel group ADF-Nalu, one of the oldest but least known armed organisations based in the Democratic Republic of Congo.

“The victims, including women and children — the youngest of which is thought to have been only a few months old — were hacked to death on December 13 and 14,” the MONUSCO statement said.

“Three girls under 18 are reported to gave been raped by the attackers and then beheaded. The mutilated and dismembered body of a child is said to have been found in a tree, in the village of Musuku.”

The attacks took place in several villages near Beni, a town which lies about 150 miles (250 kilometres) north of the provincial capital Goma, MONUSCO said. 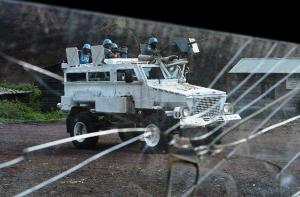 A FIB armoured vehicle of MONUSCO is pictured through a broken glass near Kibati, close to Goma on SÂ …

“These atrocities will not go unpunished,” he vowed in the statement.

The UN peacekeeping force, one of the world’s largest, has been tracking down armed groups in the region in recent months but did not provide details on who the attackers might be.

However, the North Kivu Civil Society umbrella organisation swiftly issued a statement charging that “the carnage was perpetrated by ADF-Nalu’s Ugandan rebels”.

The group urged MONUSCO to urgently launch a military operation against the rebels, which has been based in the mountainous area near the Ugandan border since its creation in 1995. 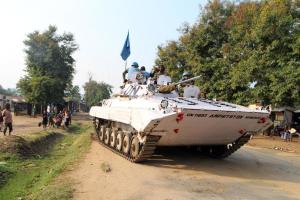 This picture taken on August 4, 2013 shows peacekeepers from the MONUSCO mission in the Democratic RÂ …

The UN mission said in its statement that an investigation had been opened and reinforcements dispatched to protect the civilian population in the area.

The unit last week set its sights on the FDLR, a Rwandan rebel group that includes the remnants of the militia who carried out the 1994 genocide and whose continued existence has poisoned relations between Kigali and Kinshasa for years.

The UN intervention brigade has promised to rid the Kivu region, which includes some of the continent’s most impenetrable jungles, of the dozens of shady armed groups and criminal gangs that have been active there for years.

Speaking last week from Goma after announcing that operations against the FDLR had begun, MONUSCO force commander Carlos Alberto Dos Santos Cruz said ADF-Nalu was next on the list.

ADF-Nalu stands for Allied Democratic Forces-National Army for the Liberation of Uganda and is considered the only Islamist organisation in the region.

In a report released a year ago, the Brussels-based think tank International Crisis Group said the group “has shown remarkable resilience attributable to its geostrategic position, its successful integration into the cross-border economy and corruption in the security forces”.

The group is led by Jamil Mukulu, a Christian convert to Islam, and has never really managed to take its fight against Yoweri Museveni’s regime to Uganda.

Some observers have voiced concern that ADF-Nalu could become a link in the growing network of radical Islamist groups in East Africa.