Dualism. But don’t you call him a Muslim. That’s “racist!”

Obama: “It’s Understandable” for U.S. and Israel to Have “Different ‘Perspectives” on Iran (GWP)

BS. His whole presidency to date was a “Muslim Outreach Program”. He stacked white house, the DHS, the FBI and the CIA with MuBro headbangers. His whole bloody presidency is nothing short of a Marxist Muslim coup d’etat.

“The Muslim community deserves our full understanding and respect,” Obama said.Â “Learn about the Muslim community, the beauty of the Sunnah and the magic of the Qur’an”. Â (Okay, this might be satire, but why isn’t he saying it if that’s what he believes?)

Orwellian Quote of the Year

Courtesy of the ASA

Did you think thisÂ graphic of mineÂ was satire? (EoZ) 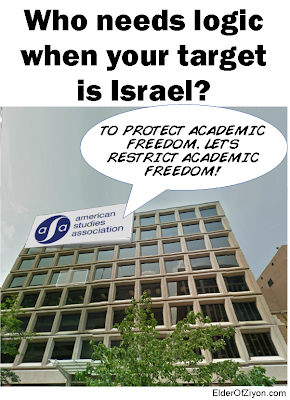 Curtis Marez, president of the association and a professor of ethnic studies at the University of California at San Diego, was quoted as saying:Â “The boycott is the best way to protect and expand academic freedom and access to education.”

That pretty much sums it up.

From the beginning, given his lifelong associations with the likes of Frank Marshall Davis and Bill Ayers and his coercion-based, redistributive politics, it has been difficult for his supporters to deny that Obama is essentially a communist. His speech Wednesday denouncing America for “income inequality” makes it practically impossible. …

Obama, His Uncle, His Aunt, Their Status, Their Total Cost To Taxpayers

Obama’s uncle said at a deportation hearing Tuesday that Obama stayed with him while he was a student at Harvard Law School in the 1980s — despite the White House having said that Obama never met the man.

He is the second of Obama’s relatives to face deportation and win. Obama’s aunt,Â Zeituni Onyango, also avoided deportation in 2010.

Â Obama’s younger years — What did (and didn’t) he do?Â

Don’t let a libtard tell you communism wasn’t that bad:

Harvard is nothing more than an elite country club that gives you a piece of paper saying you’re “educated.” Â Too bad they didn’t have a series of courses on common sense.

2 thoughts on “Obama’s uncle, his aunt and his “different perspectives” on Israel”