They must be reading Winds of Jihad:

“Gaza is next,” said one senior security official, who requested anonymity because of the sensitivity of the issue.Â “We cannot get liberated from the terrorism of the Brotherhood in Egypt without ending it in Gaza, which lies on our borders.”

Its to laugh, its to cry:

Dealing with Arab Muslims requires the abandonment of reason:

Hezbollah’sÂ Al ManarÂ claims that the constitutions of all Arab Spring countries, like Egypt, Tunisia and Iraq, as well as Afghanistan, is being written by the Mossad

Great news from the Arab world

An Al Jazeera TV host named Faisal Al-Qassem uploaded this to his Facebook page less than a day ago, and translated it to Arabic.

It is going viral.

That same Al Jazeera host has made the same point himself on his show. seeÂ hereÂ andÂ here.

Hamas calls to give military training to high school girlsÂ 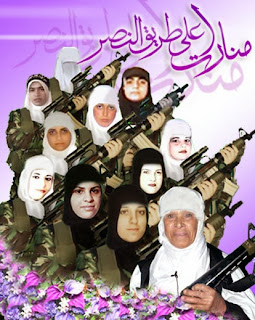 He said, “We have trained police and national security to oversee the training of girls to follow the path ofÂ istishadiyyatÂ (female suicide bombers).”

Speaking at a graduation ceremony, Haniyeh also praised the Al Qassam Brigades and the Interior Ministry Â for spearheading the boys’ military training.

The Goldstone ReportÂ clung to the fictionÂ that the Al Qassam Brigades as being a separate organization from Hamas.

Here is one of the high school boys being taught the basics: reading, writing and RPGs. 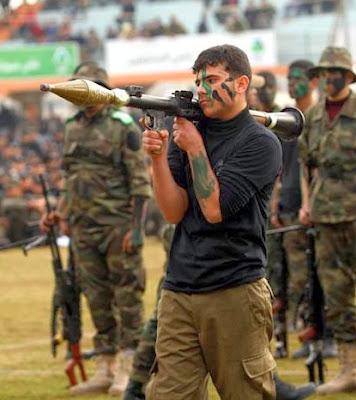 Â “The MuBro’s have gone mad because of the Jews…”

He’s a former cabinet minister. He’s read The Protocols of the Elders of Zion. What else — save for the Qur’an –does he need to know?

One more example of the Crazy Conspiracy theories in the world of Islam, made necessary because it is impossible, in that world, to recognize how Islam itself explains the many failures and distempers — political, economic, social, intellectual, moral — of Muslim states and societies, because to to do that would be to call into question Islam itself, and Islam isall they have

In a January 10, 2014 interview on the Egyptian Sada Al-Balad TV, former Egyptian housing minister Hasaballah El Kafrawy said that he had read “The Protocols of the Elders of Zion” and believed that the Jews “rule the world.” In the past, El Kafrawi has expressed similar views (see MEMRI TV clip 3745 at www.memritv.org).

Following are excerpts the interview:

Interviewer: What made the Muslim Brotherhood turn into a hostile terrorist organization that throws Molotov cocktails? It has reached the point that even their women beat people up in the streets, and so on. Have they gone made, or what?

Hasaballah El Kafrawy: Let me tell you, I believe that there is a conspiracy. I have read The Protocols of the Elders of Zion. You follow me? According to The Protocols, one of the methods… By the way, there are 16 million Jews in the world.

Interviewer: That is the total number?

HasaballahÂ El Kafrawy: There are 16 million Jews in the world, out of a total of 6,000 million people.

Interviewer: Only 16 million of them are Jews…

Hasaballah El Kafrawy: That goes without saying. When you read The Protocols of the Elders of Zion, written in Basel, Switzerland, in 1895, you can see that it is all mentioned there.

Interviewer: Including what’s happening to us?

Interviewer: Do you mean his “dear friend” Peres?

Hasaballah El Kafrawy:Â Right. He addressed him as “dear friend” and signed it with “your loyal friend.”

Interviewer: He wrote that he wished progress and prosperity upon Israel.

They rule the world. There is no doubt about it. They monopolize… They excel in science, in technology, in the economy, and in the media.

They use the non-Jewish fools, and have them fight to prevent a holocaust of the 16 million Jews.