Not satisfied to win control of “Muslim” holy sites alone, the “Palestinian Authority” Â is demanding that even the Western Wall, globally reocognized as Judaism’s holiest site, must come under its sovereignty as part of any peace deal with Israel.

“Every piece of land Israel occupied in 1967 belongs to the Palestinian state. The Buraq Wall, too, will be under Palestinian sovereignty,” Palestinian Minister of Religious Affairs Mahmoud al-Habash said in an interview with Israel’s Channel 10 News.

European Parliament President Martin Schulz came under fire Wednesday after making remarks in the Israeli parliament, the Knesset, about the water usage of Palestinians and Israelis in the occupied West Bank.–Â How the PLO politicizes water as a weapon against Israel

Schulz, seen here with Â fellow proletarians Barroso and Herman van Rumpoy, have done more for the destruction of European nation states than the Nazis.Â It is hard to tell who of the three is the most repugnant. None of these lowlives ever found Â an Oriental despot detestable; they Â allow the worst headbangers to speak in the EUro chambers, Â but they threw hissy fits to keep Geert Wilders out. Â This trio are Â the hardcore commie apparatchiks of the EUSSR, unelected, drunk with power and obsessed with the multiculti experiment, which can only proceed with mass-migration, Â Islamisation and subsequent destruction of Â the Europe we once knew. Berlusconi was way too kind when he called Schulz a Nazi ‘Kapo’…..

In a culture that praises violence as a “right,”Â this is inevitable: 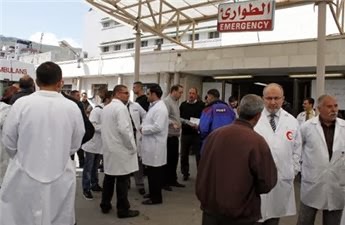 Doctors from a public hospital in Nablus organized a demonstration on Wednesday to protest the assault of a colleague by the relatives of a patient being treated in the pediatrics ward.

Dr. Hussein al-Sleibi was assaulted in Rafidia hospital on Tuesday by two relatives of a child, doctors told Ma’an. The family members threatened al-Sleibi and two nurses with a knife during the incident after claiming they were neglecting the patient.

Doctors said they organized the demonstration to protest aÂ growing number of assaults against medical teams.

Director of the Nablus office of the Ministry of Health, Amirah al-Hindi, told Ma’an thatÂ the last decade has seen a spike in violent incidents against hospital staff.

It is not surprising. Palestinian Arabs have been attacking UNRWA, for example,Â since the very beginning– an organization funded by the world to specifically coddle them. Their leaders sayÂ terrorists are heroes. Violence is an inherent part of Palestinian Arab culture, as is the sense of entitlement.

Attacking those who are trying to help them comes naturally.

Given that, what are the chances of real peace with people they hate?