Australia should not have a “national imams council”. That would eliminate the ‘dismay’ over what the media reports.

What’s the collective term for a group of imams?

It’s an important question. As Australia’s Islamic population continues to swell, we will be dealing with groups of imams on a regular basis. So we might as well come up with the term now. If you have a suggestion please send it through.

In the absence of anything better, I’m going to go with a ‘Frenzy of Imams’ for the time being. It seems comfortably apt.

For those who don’t know, Australia has an official Frenzy of Imams. It’s called theÂ Australian National Imam’s Council. And they have been whipped into a frenzy of late. It’s not because some Islamic convert married his 12 year old daughter off to a Lebanese man. Rather, it is because the media has covered this scandal.

Hence the frenziedÂ press releaseÂ that started with the words:

You can read it in full here. Â Click on image to enlarge:

This media statement is enlightening primarily for what it doesn’t say.

It doesn’t say anywhere that marrying a 12 year old girl is against Islamic law. Nor does it say that Islam condemns this form of institutionalised paedophilia. And nowhere is it mentioned that Australia’s Islamic community should report such marriages to the police.

What Australia’s Grand Mufti does say is that marrying a child is to be rejected and condemned from a legal and ethical perspective. While he’s right, the Head Honcho of Australia’s Islamic community is playing with words. It’s very deceptive and Dr Abrahim Salem should be called out for it.

All Dr Salem has done is acknowledge that child marriage is againstÂ AustralianÂ law andÂ Australianethical standards which are based on ourÂ ChristianÂ heritage. He gives no indication anywhere that he supports these standards or that they are more worthy than Islamic ones. In fact, the Grand Mufti even goes so far as to say that it is up to Australian legal authorities to deal with this case. According to Dr Salem, it is not up to Islamic authorities to do or say anything against child marriage.

Furthermore, this statement pretends that the Islamic world is an enlightened bunch. Apparently, many Islamic countries stipulate the age of marriage at a point somewhat higher than Mohammad did. Dr Salem even gives an example: in Lebanon the marriageable age for a woman is 17.

Isn’t that nice. Of course, what the Grand Mufti really means is that a whole bunch of other Islamic countries are not as enlightened as Lebanon. But he didn’t mention that, did he.

More importantly, the good Grand Mufti is again playing with words. He’s again being deceptive. That’s because in Lebanon 17 is the age of marriage for any womanÂ withoutÂ her guardian’s permission. Dr Salem failed to mention the entire law. If he did, he would acknowledge that in Lebanon a woman can be married off at theÂ ripe old age of nineÂ if she gets her guardian’s permission. And sometimes it isn’t even permission – it’s an order.

Perhaps the media should ask Dr Salem why he thinks Lebanese marriage laws are so great when they permit girls in Grade 3 to be married off to their dirty, older cousins.

Finally, the most scandalous part of this press release regarding the scandal of Islamic child marriage in Australia is the warning it gives to imams.

That’s right. According to Australia’s Grand Frenzy of Imams, the Islamic community is separate from the rest of the non-Islamic people in this country. There are Muslims and there are ‘the Australians’. And caution is to be exercised when a child of ‘the Australians’ is to be married off to a Muslim, lest another imam is apprehended. I suppose it’s understandable. The Grand Frenzied National Imams Council doesn’t want any more of its imams dragged before the Australian courts.

I stated the other day thatÂ Mohammad married a six year old. This example is the reason that child marriage has become a problem in Australia. His followers, generally called Muslims, want to follow his example. Hence the Grand Mufti’s inability to condemn Mohammad’s actions. The only thing Dr Salem will say about Mohammad is that he was as perfect as anyone can be. In that sense, Islam is less a religion and more a cult of personality worship.

Non Muslims do not understand this very well. Nor do they understand exactly how much significance is given to Mohammad’s sexual proclivities. They are recorded throughout all the Islamic texts and in great detail. In fact, more detail than most would want. That’s how we know that Mohammad’s young wife, Aisha, used to spend her time cleaning semen off his clothes.

I used to wash the traces of Janaba (semen) from the clothes of the Prophet and he used to go for prayers while traces of water were still on it (water spots were still visible).

There are two ways of looking at this verse.

The Islamic way is to assume that everything Mohammad did was perfect. Therefore, we should all praise Allah for sending a prophet who was not only virile, but also concerned enough about his appearance that he had his young wife clean up after him.

The objective way is to compare Mohammad’s actions against standards of good and evil. This is the logical way and it necessarily leads to the condemnation of Mohammad for being a sexual deviant and for forcing a child to deal physically and emotionally with his uncontrolled lust.

Australia’s Grand Mufti has chosen the former path. And so has the Frenzy of Imams around him.

That is why their press release did not condemn child marriage, but was nothing more than a deceitful and carefully worded statement protecting this institutionalised form of Islamic paedophilia. 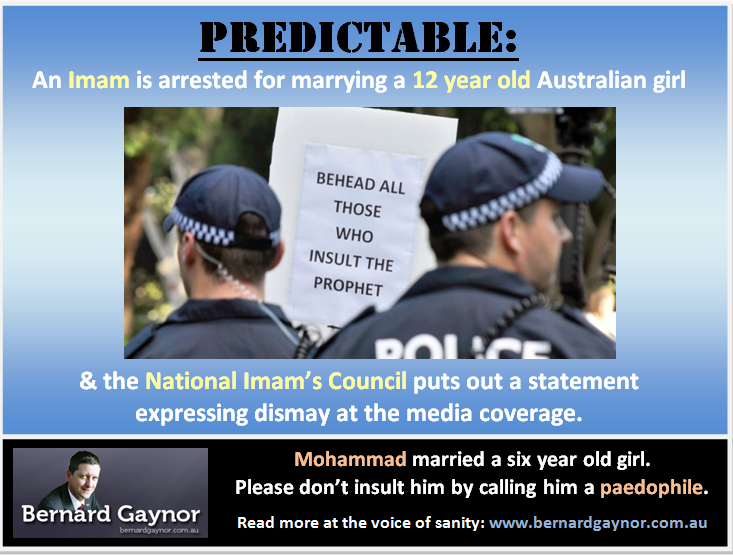