As soon as someone on the “far-right” says yes, the far left journaillie closes in like a pack of wolves. Â Recently, the full force of leftist connivance came out against Â aÂ Facebook post by Michael Hess, vice chair of the Sweden Democrats in Karlskrona in southern Sweden, in which he wrote that “rape is deeply rooted in Islamic culture”.Â Linus Bylund, press secretary for party leader Jimme Ã…kesson, doubled down withÂ Â “rape is a Muslim form of punishment”, but when pressed by BLT about which passage in the Koran condoned rape as a form of punishment, Bylund said he did not know. It is preposterous that everyone in the west who criticises the Islamic expansion project is expected to be a hafiz (a Koran reciter who knows the Koran by heart). The journaillie, generally clueless and ignorant about their own history and religion, goes all out to bat for their muselmanic masters, who have no use for them once their goal is achieved. 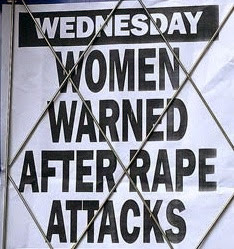 Critics ofÂ IslamÂ and Sharia frequently claim that theÂ Qur’anallows Muslim men to rape their female captives and slave girls (i.e. those “whom their right hands possess”). Westernized Muslims, however, are appalled at the thought of their religion allowing rape, so they insist that Islam prohibits this practice. Unfortunately, Islam isn’t defined by Westernized Muslims; it’s defined byÂ AllahÂ andÂ Muhammadin the Qur’an and the Hadith. So instead of inventing a religion based on the feelings of Westernized Muslims and calling it “Islam,” let’s turn to the Qur’an and the Hadith to see what Allah and Muhammad have to say about this issue.

Qur’an 23:1-6â€”The Believers must (eventually) win throughâ€”those who humble themselves in their prayers; who avoid vain talk; who are active in deeds of charity;Â who abstain from sex, except with those joined to them in the marriage bond, or (the captives) whom their right hands possessâ€”for (in their case) they are free from blame.Â

Qur’an 70:22-30â€”Not so those devoted to Prayerâ€”those who remain steadfast to their prayer; and those in whose wealth is a recognized right for the (needy) who asks and him who is prevented (for some reason from asking); and those who hold to the truth of the Day Of Judgement; and those who fear the displeasure of their Lordâ€”for their Lord’s displeasure is the opposite of Peace and Tranquilityâ€”and those who guard their chastity, except with their wives and the (captives) whom their right hands possessâ€”for (then) they are not to be blamed.

Qur’an 33:50â€”O Prophet! surely We have made lawful to you your wives whom you have given their dowries, and those whom your right hand possesses out of those whom Allah has given to you as prisoners of war …

Sahih Muslim 3371â€”We went out with Allah’s Messenger on the expedition to the Bi’l-Mustaliq and took captive some excellent Arab women; and we desired them, for we were suffering from the absence of our wives, (but at the same time) we also desired ransom for them. So we decided to have sexual intercourse with them but by observing azl (withdrawing the male sexual organ before emission of semen to avoid conception). But we said: We are doing an act whereas Allah’s Messenger is amongst us; why not ask him? So we asked Allah’s Messenger, and he said: It does not matter if you do not do it, for every soul that is to be born up to the Day of Resurrection will be born.

Sahih Muslim 3384â€”Jabir bin Abdullah reported that a person asked Allah’s Apostle saying: I have a slave-girl and I practice azl with her, whereupon Allah’s Messenger said: This cannot prevent that which Allah has decreed. The person then came (after some time) and said: Messenger of Allah, the slave-girl about whom I talked to you has conceived, whereupon Allah’s Messenger said: I am the servant of Allah and His Messenger.

Clearly, Muslims were taking full advantage of Muhammad’s teachings about female captives and slave girls. Nevertheless, Muslims eventually captured womenÂ along with their husbands, so they wondered if Allah would allow them to have sex with theseÂ marriedÂ captives (since adultery is otherwise forbidden in Islam).

Qur’an 4:24â€”Also (prohibited are) women already married, except those whom your right hands possess …

Sunan Abu Dawud 2150â€”The Apostle of Allah sent a military expedition to Awtas on the occasion of the battle of Hunain. They met their enemy and fought with them. They defeated them and took them captives. Some of the Companions of the Apostle of Allah were reluctant to have intercourse with the female captives in the presence of their husbands who were unbelievers. So Allah, the Exalted, sent down the Qur’anic verse: “And all married women (are forbidden) unto you save those (captives) whom your right hands possess.” That is to say, they are lawful for them when they complete their waiting period.

2 thoughts on “Does Islam Allow Muslims to Rape Female Captives and Slave Girls?”