Jihad families, especially the mothers, are said to have been ecstatic at the volley of rockets.

Â Islamic Jihad has now eclipsed Hamas as the ideological leader of Gaza.

Palestinian Authority President’s Representative: “Allah Will Gather Israelis So We Can Kill Them”

“I genuinely believe that you do have a true partner in President Abbas,” Obama said. 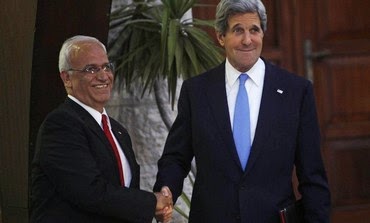 On Thursday, US Secretary of State John FN Kerry told a Congressional committee that there is no need for Israel to insist that the ‘Palestinians’ recognize it as aÂ Jewish state. On their way into Sunday morning’s cabinet meeting, several ministers – not Netanyahu of course – slammed Kerry for taking the easy way out by pressuring only Israel, and not the ‘Palestinians.’ (Carl)

One thought on “Pallywood”