Kenya’s parliament has passed a bill allowing men to marry as many women as they want, prompting a furious backlash from female lawmakers who stormed out, reports said Friday.

The bill, which amended existing marriage legislation, was passed late on Thursday to formalise customary law about marrying more than one person.

The proposed bill had initially given a wife the right to veto the husband’s choice, but male members of parliament overcame party divisions to push through a text that dropped this clause.

“When you marry an African woman, she must know the second one is on the way, and a third wife… this is Africa,” MP Junet Mohammed told the house, according to Nairobi’s Capital FM.

Women are not allowed to marry more than one man in Kenya.

The bill must now pass before the president to be signed before becoming law.

As in many parts of Africa, polygamy is common among traditional communities in Kenya, as well as among the country’s Muslim community, which accounts for up to a fifth of the population.

“Any time a man comes home with a woman, that would be assumed to be a second or third wife,” said Samuel Chepkong’a, chairman of the Justice and Legal Affairs Committee, the Daily Nation newspaper reported. 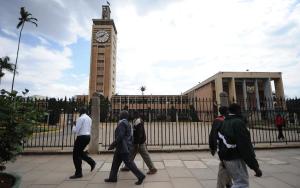 Kenyans walk past the parliament building in Nairobi on September 5, 2013 (AFP Photo/Simon Maina)

“Under customary law, women or wives you have married do not need to be told when you’re coming home with a second or third wife. Any lady you bring home is your wife,” he added.

Female MPs stormed out of the late-night session in fury after a heated debate.

“We know that men are afraid of women’s tongues more than anything else,” female legislator Soipan Tuya told fellow MPs, according to Capital FM.

“But at the end of the day, if you are the man of the house, and you choose to bring on another party — and they may be two or three — I think it behoves you to be man enough to agree that your wife and family should know,” she added.

A clause in which a partner who had promised marriage but then backed out of the wedding could face financial damages was also dropped, as male MPs argued it could have been used to extort cash.

They also argued that marriage should be based on love, and not have a financial cost placed upon it.

Parliamentary majority leader Aden Duale, a Muslim, said that men marrying more than one woman was part of the Islamic faith, but also highlighted Biblical stories to justify Christians not asking their wife before taking another.

“I want my Christian brothers to read the Old Testament — King David and King Solomon never consulted anybody to marry a second wife,” Duale told the house.

Women are not allowed to marry more than one man in Kenya.

The bill must now pass before the president to be signed before becoming law.