POLICE had to call in reinforcements after a group of hard line Muslims gathered at a Sydney police station clamouring for the release of a woman later charged with supporting terrorism.

The mother-of-four was arrestedÂ­ as she allegedly tried to board a flight in Sydney carryingÂ­ cash and equipment â€” believed to include camouflage gear â€” for her husband fighting in Syria.

Import of Islamic battles must end

(Why not end the import of Koranimals instead?)

It is bad enough that Australian citizens are joining, in relatively large numbers, a foreign conflict. Worse still is that they are becoming members of radical Islamic groups, whose extreme doctrines of hatred and intolerance therefore gain a greater hold within Australia’s Muslim community. … (Mullah)

A police spokesman said the Brisbane woman was taken to Mascot police station and later charged.

Three search warrants were also executedÂ­ â€” two in Sydney and one in Brisbane.

Hardline supporters arrived at the police station after news of the woman’s arrest was posted on social media, with police forced to call for back-up to deal with them.

She was granted strict conditional bail by police and will appear at Downing Centre Local Court on June 2.

“The Brisbane woman was taken to the Mascot police station, where she was charged under the Crimes (Foreign Incursions and Recruitment) Act 1978,” the spokesman said.

“She was charged with supporting incursions into a foreign state with the intention of engaging in hostile activities.”

Sources have confirmed the mother was allegedly carrying an amount of cash and other supplies â€” believed to include camouflage gear â€” on behalf of her husband, who is in Syria.

The Al-Risalah Facebook page â€” a meeting place for young Muslims â€” yesterday claimed the woman’s passport had been confiscated. “As per the sister who was stopped at the airport last night she and her kids are now safe with family but passport has been taken,” the post said.

Previous posts on Facebook about the arrest were removed after the woman’s family contacted the page’s convener.

While inner-west Sydney remains the hotbed of Islamic fundamentalism in the country, a tangled web of networks runs along the east coast from Brisbane down to Melbourne. In September, reports emerged of a 27-year-old Brisbane man becoming Australia’s first suicide bomber in Syria after a video showed the bombing of a military checkpoint, killing 35 people.

More than 100 Australians, many from NSW and mostly young men, have travelled to Syria via alleged terrorist support networks linked to Jabhat Al Nusra and State of Iraq and the Levant movements.

The total number of Australians killed in Syria is believed to be eight, including Melbourne men Roger Abbas and Yusuf Toprakkaya.

Former Sydney soldier Caner Temel, who went AWOL from his Brisbane barracks and was later discharged, was killed by gunfire from other anti-Assad rebels in January.

The 22-year-old left behind a wife and baby.

Ali, a US-Australian citizen, grew up in suburban Brisbane and converted to Islam, later becoming a street preacher. Just last week, FBI director James Comey said the flow of foreign fighters into Syria had grown in the past few months.

Up to 5500 foreign fighters have travelled to Syria to fight and Mr Comey compared the flow with Afghanistan in the 1980s and 1990s. 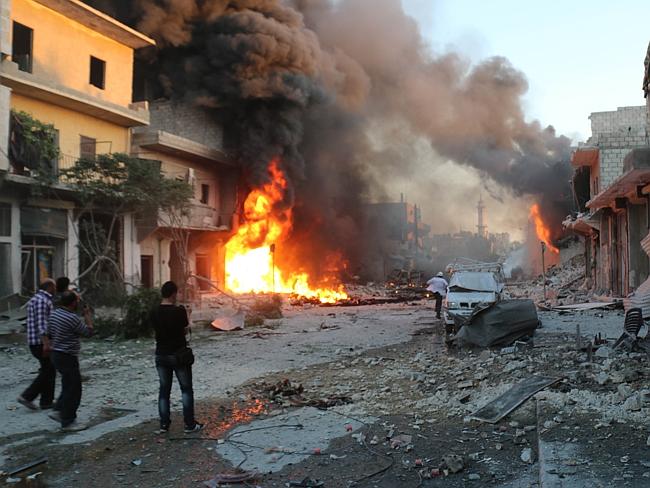 AS President Bashar al-Assad wrestles back control of Syria, Islamic fighters struggle to hold on to their gains. While the exact figure is unknown, it is estimated more than 100 Australian Muslims have travelled to Syria to fight alongside al-Qaeda affiliated rebels.

The number of passports cancelled by ASIO has soared to record levels, preventing people from travelling to Syria on security grounds. In March, it was reported 33 passports were cancelled in eight months. Last month, the Lowy Institute report Next-Gen Jihad in the Middle East reiterated concerns of the Abbott government and NSW Police about young men returning to Australia with combat training.

“In the coming years Australia will face a more complex and serious terrorist threat than it did after 9/11,” Lowy Â­Institute research director Â­Anthony Bubalo said. A GROUP of eleven terrorists with links to al-Qaeda are being interrogated in Malaysia over whether they are Â­behind the disappearance of flight MH370.

The suspects were arrested in the capital Kuala Lumpur and the state of Kedah last week and are members of a Â­violent new terrorist group said to be planning bomb Â­attacks in Muslim countries.

The interrogations came after international investigators, including the FBI and MI6, asked for the militants â€” whose ages range from 22 to 55 and include students, odd-job workers, a young widow and business professionals â€” to be questioned intensively about flight MH370.

Almost two months after the Beijing-bound aircraft with 239 people on board vanished soon after takeoff, no trace has been found. An officer with the Counter Terrorism Division of Malaysian Special Branch said the arrests had heightened Â­suspicion that the flight’s Â­disappearance may have been an act of terrorism.

Some suspects have Â­admitted planning “sustained terror campaigns” in Malaysia but denied being involved in the disappearance of the Â­airliner, he added.

There have also been new theories regarding revelations that the flight was carrying 2.25 tonnes of freight not been listed on a freight manifest.

On Friday, it was discovered that the flight was Â­carrying 4.5 tonnes of fruit and a shipment of lithium Â­batteries, part of a separate consignment.

The batteries weighed 200kg, but the Â­consignment totalled 2453kg â€” raising questions about what was being carried to make up the total weight.

Why have we imported this danger? Why won’t the ABC discuss it?

POLICE had to call in reinforcements after a group of hardline Muslims gathered at a Sydney police station clamouring for the release of a woman later charged with supporting terrorism.

Three search warrants were also executedÂ­ â€” two in Sydney and one in Brisbane.

Hardline supporters arrived at the police station after news of the woman’s arrest was posted on social media, with police forced to call for back-up to deal with them…

More than 100 Australians, many from NSW and mostly young men, have travelled to Syria via alleged terrorist support networks linked to Jabhat Al Nusra and State of Iraq and the Levant movements.

So we already have enough “hardline Muslims” supporting a woman charged with supporting terrorism to force police to call for reinforcements. Now imagine if their community was allowed to triple in size. How many more police would be needed at such protests? How many more Australians would be serving with terrorist groups?

These are tough questions, andÂ check how far the ABC and official police sources go to avoid even suggesting them. Which religion? Which country was she heading to?

A mother of four has been arrested at Sydney Airport and charged during a police counterterrorism operation.

Officers from the joint counterterrorism team stopped a woman trying to board an international flight with her four young children on Saturday evening.

Police say the 29-year-old Brisbane woman was arrested and taken to Mascot Police Station in Sydney’s south, where she was charged with supporting incursions into a foreign state with the intention of engaging in hostile activities.

Police will not say where the woman is from or where she was intending to travel.

But even theÂ Sydney Morning HeraldÂ is able to report what the ABC won’t:

A mother-of-four has been charged with supporting terrorism after she was arrested at Sydney Airport while trying to board a flight to Syria with her young children, police say…

The organiser of the Bankstown-based al-Risalah Facebook page claimed on Sunday morning that the woman’s passport had been confiscated.

9 thoughts on “Mothers of Jihad: Muselmob gangs up on Sydney police station clamouring for the release of terror Mama”