Mohammedanism in the Knesset:Â Jews have no human rights. 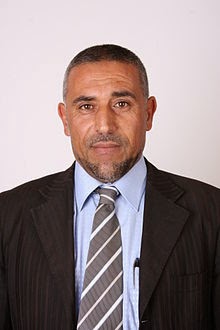 He wears a tie so he’s a moderateTaleb Abu Arar, a Knesset member under the United Arab List, has said that Jews have no claim on the Kotel or the Temple Mount.

Both the exegesis of the Qur’an and reading of the Hadith literature speak of sex slavery of non-Muslim female POWs both during and after the life of Prophet Mohammed.

Instead of being courageous and saying while such commandments and permissions may have been valid in the seventh century, they are no longer applicable in the era of the nation-state and human rights, leaders of my community choose doublespeak.

A question for Mr. Fatah:Â when, exactly, were these commandments and permissions invalidated, and by whose authority were they deemed “no longer applicable”? I thought everything in the Qur’an,Â a supposedly perfect book about theÂ man Muslims believe to be the most perfect human being who has ever lived, is as valid today as was back in the 7th C, and, indeed, is valid for all time.

Could it perhaps be Mr. Fatah who is engaging inÂ a bit of doublespeak here?

Islamophobia Thrives on the Internet

A new report shows that Islamophobia is metastasizing on the Internet. After anti-Muslim sentiment crystallized in 2010 around the construction of an Islamic interfaith center in Manhattan, there’s been a sharp increase in such feelings.

“In recent years, we have seen hate groups and anti-Muslim activists use the Internet and social media platforms to spread hate,” Madihha Ahussain, staff attorney at Muslim Advocates and lead author of the report, tells me. “For example, Pamela Geller, a well-known anti-Muslim proponent who has her own blog, had 19,000 supporters on Facebook last summer.Â Today, less than a year later, she has over 78,000 supporters.”

There’s Act! for America, led by Brigitte Gabriel, who, the New York Times reports, “presents a portrait of Islam so thoroughly bent on destruction and domination that it is unrecognizable to those who study or practice the religion.” Her outfit claims to have roughly 875 chapters and 279,000 members nationwide. Its Facebook page has almost 84,000 likes.

The United States Defense League, dedicated to “exposing Shariah law,” has nearly 23,000 likes for its page.

A blog named Bare Naked Islam has a reported 51 million hits since 2008.

The report does a good job of highlighting disturbing use of social media by elected representatives.

“It’s quite troubling to see the extent of hate online, particularly when it comes from public officials and public figures that are using their personal Facebook pages or social media accounts to encourage violence against American Muslims,” Ahussain says. “It’s clear that anti-Muslim bigotry online is alive and well on these various social media platforms.”

The report cites the case of a Tennessee county commissioner, Barry West, who posted a Facebook picture of a man aiming his gun with one eye closed. The photo was captioned: “How to Wink at a Muslim.”

And there is the online spewing of hate by public commentators. After the April Fort Hood shooting, Patrick Dollard, a documentary filmmaker and past Breitbart News contributor, tweeted, “If there is even one more act of Muslim terrorism, it is then time for Americans to start slaughtering Muslims in the streets, all of them.” In the immediate aftermath of the Boston bombings, Fox news contributor Erik Rush was more succinct: “Yes, they’re evil. Let’s kill them all.”

Ahussain and her colleagues recommend some things that can be done to fight such hate without violating free speech.

“The report focuses on two methods of responding to hate online: using the tools that Internet companies have put in place to report content that violates their policies, and engaging in counterspeech,” Ahussain says. “Many of the leading companies have policies specifically dedicated to hate speech on their platforms and they look to us, the users, to report the content.”

“Also, counterspeech has been a powerful antidote to bigotry that can completely transform a hate-fueled conversation into something productive and positive,” she adds. “We were inspired by the research surrounding counterspeech and how powerful it can be.Â In research that Twitter shared with us for the report, we saw that social media users often use ridicule and humor to drown out hate and we hope that this report will encourage others to do the same.”

As an example, the report cites the barrage of online hate received by the current Miss America Nina Davaluri (actually of Hindu background) when she won the contest last year. Some of the offenders actually apologized when challenged.

Ahussain wants the White House to address such bigotry.

“We recommend that the White House convene aÂ national-level dialogue on hate against religious communities,” she says, “and invite Internet companies to participate in discussions about how to address this issue.”

“Buddha didn’t create us, Mohammed didn’t create us, it was the God of the Holy Scriptures,” Alabama Chief Justice Roy Moore is reported to have said in remarks that leaked public in the past few days. “They didn’t bring the Koran over on the pilgrim ship.”

And California GOP gubernatorial candidate Tim Donnelly recently reposted on his Twitter account an article accusing primary opponent Neel Kashkari (again, of Hindu ancestry) of assisting in the imposition of Shariah law when he was part of the Treasury Department in the Bush Administration.