“No evidence of a conspiracy”. Do you remember that reassuring phrase? …

Turns out there was Â a “disconcerting pattern” in the schools, including nepotism in staff appointments, bullying of senior teachers, a “strategy of harassment to oust the head teacher” and the “reinforcement of Muslim identity to the exclusion or disparagement of others”. 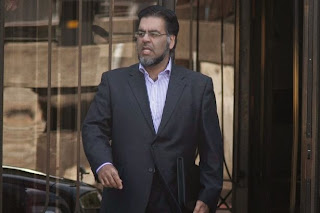 One of the ringleaders of the Islamist plot to take over British schools, Shahid Akmal, former governor at Nansen Primary School in Birmingham, is exposed today as a sexist, racistbigot.

There is “disturbing” evidence that people with a “shared ideology” were trying to gain control of governing bodies in Birmingham, says Education Secretary Nicky Morgan.

She was responding to the Trojan horseÂ report from former counter-terror chief Peter ClarkeÂ into allegations of a hardline Muslim take-over of schools.

What a joke! Oh how funny it all was!

This is no surprise. Islamic supremacists never, ever take responsibility for the evils perpetrated by Islamic jihadists. They always deflect responsibility to the victims, the Infidels. What is surprising is that British officialdom is shocked by all these revelations â€” why should they be? This is the situation that for years they have aided and [Robert SpencerÂ /Comments]Â Continue Reading Â»

The Islamist ‘Trojan Horse’ Plot: Why Lessons Won’t Be Learned

“No evidence of a conspiracy”.

Do you remember that reassuring phrase? You should because it was being enthusiastically bandied about in the left-leaning media (led, of course, by the BBC) less than a week ago – as the pull-out headline quote from local headteacher Ian Kershaw’s “independent” report into the Birmingham schools Islamist Trojan Horse plot.

Elsewhere in the report, Kershaw (most definitely not to be confused with the distinguished Hitler historian) conceded that anxiety at Birmingham City Council about perceived racism or Islamophobia may have contributed to the problem. But in the main Kershaw’s conclusions were optimistic. The Islamists involved in the conspiracy that wasn’t a conspiracy were motivated by the noblest of intentions. Apparently.

“”It appears that there is a genuine and understandable desire among these groups to improve the education and opportunities for Muslim pupils. The desire is often coupled with a belief that these children can only be served by Muslim leaders and teachers.” [love that “understandable”!]

Phew. There were some of us thinking that it’s a bit worrying that taxpayer-funded schools in parts of Britain are being run by religious fanatics who think that girls and boys should be segregated (with girls at the back), that homosexuals are “animals”, that women “must serve men” and that the brutal murder of Drummer Lee Rigby was in fact a 9/11 truther-style false flag operation to discredit Islam. But now we know it was all OK because Ian Kershaw – a headteacher, so he should know – tells us that they were just trying to do what was best for the kids. (Ethnic kids, too, so that makes it better still!)

Kershaw’s whitewash was, it seems likely, cynically and deliberately commissioned by Birmingham Council in order to pre-empt and undermine any more serious inquiries. (In this regard, it is not unlike the report into Climategate commissioned by the University of East Anglia which concluded, more or less, that the UEA’s climate scientists were delightful, hardworking, almost God-like beings, like Einstein and Newton only cleverer and better, who may once have mislaid a departmental paperclip but were otherwise unimpeachably fantastic and had nothing about which to be ashamed.)

Former Education Secretary Michael Gove saw this trick a mile off which is why – in the teeth of local opposition from everyone from Birmingham City Council to West Midlands police – he brought in an outsider, former anti-terrorism chief Peter Clarke, to conduct an investigation of his own.

Clarke’s conclusions could scarcely have been more different from Kershaw’s.

“There has been a co-ordinated, deliberate and sustained action carried out by a number of associated individuals to introduce an intolerant and aggressive Islamist ethos into a few schools in Birmingham.”

“I found clear evidence that there are a number of people associated with each other in positions of influence in schools and governing bodies who espouse, sympathise with or fail to challenge extremist views.”

“Whether the motivation reflects a political agenda, a deeply held religious conviction, personal gain or achieving influence within the communities, the effect has been to limit the life chances of the young people in their care and to render them vulnerable to more pernicious influences in the future.”

So: guess which version of events is going to become the take-home message for the entrenched political Establishment of the liberal-left (the local councils; large swathes of the “Muslim community”; the more politically correct police forces; Labour and Liberal MPs; the BBC and the Guardian; etc)?

Actually we already have a pretty good clue from articles like this one by theÂ Guardian’s Hugh Muir.

Turns out – per Muir – that despite the unfortunate stuff about Lee Rigby, the anti-Israel sentiment, the homophobia, and the segregation that “these were schools which had many academic qualities.” (Really? Name them, Hugh).

And that, furthermore, what this whole ugly business really demonstrated is how ghastly Michael Gove is.

If there was zealotry in Birmingham, it found its echo in Gove’s department of education.

Still, at least we know have a better idea than ever before of the liberal-left’s hierarchy of values. When it comes to the rights of “oppressed” minorities, the order of precedence goes like this.