The nauseating dismayed shock of some, not all of them Muslims,Â  is reported — nauseatingly but unsurprisingly because it’s The Guardian —Â here.Â (Hugh Fitzgerald)

French Muslim women on burqa ban ruling: ‘All I want is to live in peace’

Jonathan Birchall, of theÂ Open Society FoundationsÂ established by the billionaire financier George Soros, said: “We are all rather shocked by today’s burqa ban ruling … the court seems to have invented a new legal concept to justify the ban.” 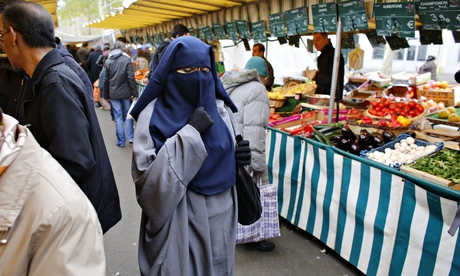 A woman wears a burqa at a market in Paris despite it being banned in France. Photograph: Philippe Lissac/Photononstop/Corbis

Anti-discrimination organisations have expressed shock after the European court ofÂ human rightsÂ ruled that France has the right to ban women from wearing the full-face veil in public in the interests of everyone “living together”.

Stop presses! The burqa, believe it or not, is unislamic!

“For too long the British establishment has been hoodwinked by Muslim zealots that the burka/niqab is intrinsic of Islam. Â It is nothing of the sort: it is pre-Islamic, non-Koranic and ipso facto un-Muslim. … ” –Taj Hargey

More on the hoodwinked British establishment atÂ ExpressÂ thanks to Mullah, pbuh…..

4 thoughts on “Why is George Soros' Open Society waging legal jihad for the burqa in France?”