Every day it becomes terribly clear how vicious it was of the despicable Klintoons to send US troops to fight alongside Albanian Muslims and defeat the Christian Serbs in the cause of Islam. American troops fought in order to pave the way for an Islamic (narco-jihad) statelet in the heart of Europe â€” Kosovo.

Not only are Muslims from Kosovo going to Iraq and Syria to wage jihad. They are also waging jihad against non-Muslims in Kosovo. Their successful and continuing ethnic cleansing of non-Muslims from parts of the former Yugoslav Republic is owed largelyÂ to Bill Clinton’s war in Bosnia, sold to the clueless Clinton administration by the notorious EU dhimmis.

The Bosnian capital of Sarajevo, once a symbol of ethnic diversity, hasÂ become an entirely Muslim city.Â All non-Muslims have been ethnically cleansed for Sarajevo.

More from Obama’s peaceful Islam and John Kerry’s religion of peace.Â  This is one of Kosovo’s leading moderates.–Pamela Geller 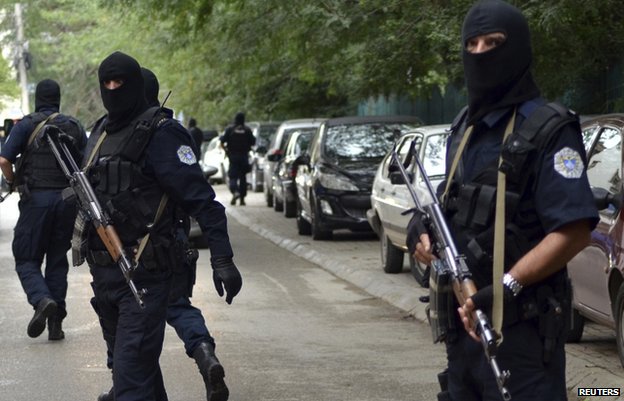 Fifteen people have been detained in Kosovo in an operation aimed at tackling recruitment of fighters for Islamic State (IS) in Syria and Iraq.

Among them are several imams, including the head of Pristina’s Grand Mosque, Shefqet Krasniqi, local reports say.

Some 200 Kosovo Albanians have gone to fight in Syria and several have died.

IS is thought to have attracted hundreds of European recruits in its campaign to set up a “caliphate” in broad swathes of Syria and Iraq. 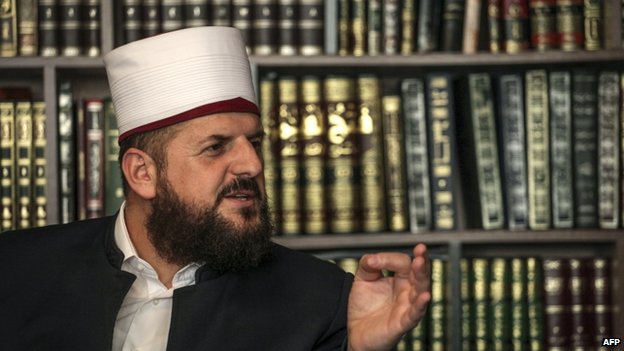 Imam of Pristina’s Grand Mosque, Shefqet Krasniqi is one of Kosovo’s leading clerics

Kosovo police did not name those arrested, publishing only their initials, but said the operation had been carried out following threats and due to the importance of national security.

Many of those held were from Pristina, Prizren or the flashpoint town of Mitrovica.

Islamist leader Fuad Raqimi was detained after a raid on his flat, reports said.

US envoy Tracey Jacobson,Â in a tweet, praised Kosovo’s “pro-active response against fighters and terrorism”.

Last month, 40 people were arrested as police searched dozens of sites across Kosovo, including makeshift mosques thought to have been used as recruitment centres.

In common with other European governments, Kosovo is tightening up its laws to tackle the rise in jihadists travelling to the Middle East.

Germany announced on Friday that it would seek to prosecute anyone who tried to recruit for IS or spread the group’s propaganda.

French MPs on Tuesday backed a new anti-terror bill that would enable the passports of potential jihadists to be confiscated.

Six people were detained in the Lyon area of France on Wednesday, including a 13-year-old girl, on suspicion of playing a part in sending young girls to Syria.

One thought on “Kosovo: 15 Islamic holy men arrested for recruiting headchoppers for the Islamic state”