The following essay by the prominent Austrian journalist Christian Ortner was originally published on his website. Many thanks to JLH for the translation:

The EU as an Accomplice to Terror

This past weekend the EU decided to devote half a billion euros of tax money to rebuild the Gaza Strip, which was partially destroyed during the last war. And since this money, of course, is non-existent, that much debt will accrue.

Just a reminder: This summer, the Gaza Strip was used by the governing Hamas regime as a launch pad for more than 2,000 rockets fired at Israeli schools, hospitals, a nuclear research center and other civilian targets. And because Israel had the unmitigated gall to defend itself militarily instead of peaceably observing, there is now considerable damage to buildings. Not least because Hamas is especially fond of using schools and hospitals as launching platforms; several of them in Gaza are in ruins. 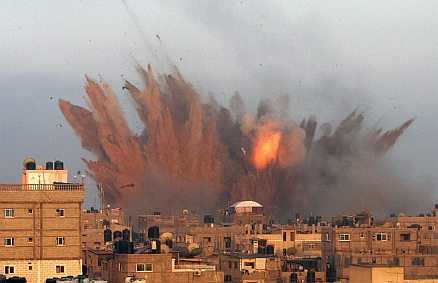 If you hold your nose, you can half-heartedly argue that it is appropriate on “humanitarian grounds” for the EU to shell out for rebuilding Gaza. For now, we can ignore the fact that the population of Gaza democratically elected Hamas. The EU flushes tons of moolah down the toilet for other nonsense, including some hundreds of millions to Turkey.

And still, this promise by the EU to give Gaza a half billion leaves a taste in the mouth like fresh vomit. Because now Hamas knows that, whenever they are in the mood to shoot rockets at Israeli kindergartens, they don’t have to be afraid of economic consequences. The EU will pick up the bill for any damages from Israel’s countermeasures. The European taxpayer will be glad to take care of it, even though â€” to play it safe â€” he isn’t being asked.

And that is how the EU is making life easier for Hamas and all the other Islamic groups that are eager to carry on with Herr Eichmann’s Final Solution to the Jewish Problem, at least indirectly with the trade-craft.

So it will probably only be a matter of time until the EU also helps out the Islamic State with a few hundred million, to remedy any damages that may be expected from Allied air attacks on the off-with-his/her-head-jihadists.

And the European taxpayer will also be glad to pay for that. It’s a sure thing.

4 thoughts on “The EU as an Accomplice to (Islamic) Terror”