Siegertsbrunn (Bavaria) During a meeting organised by the CSU , retired Protestant pastor Ulrich Wagner proposed the idea to provide free prostitute services to  asylum seekers. Funding could, he said, be provided by financial donations to charitable souls or brothel managers. Ulrich Wagner puts this idea forward in order to address the fears of sexual assault affecting German villages which are housing the asylum seekers.

WOO HOO! Swedish Democrat calls for ban on Islam, deportation of anyone who practices it

Ban Islam in Sweden and deport those who persist in believing in the religion”, said Pär Norling, group leader of the Sweden Democrats (SD) in Bollnäs, in an…   BARENAKEDISLAM.COM

Nothing must slow down Islam 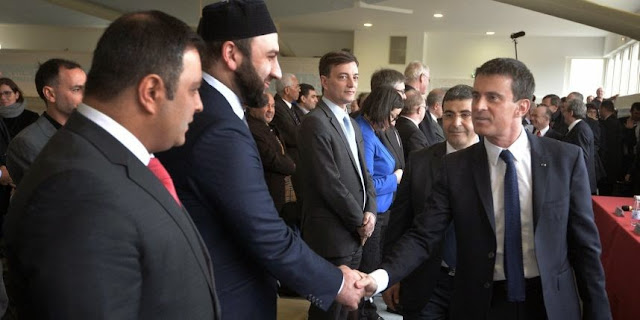 The comments made by Manuel Valls on March 3 during a visit to the grand mosque of Strasbourg (above) are worth noting, even though I’m a bit late in reporting them. They come under the same category as those made by Interior Minister Bernard Cazeneuve, who recently announced a new “dialogue” with Muslim leaders and the relaunching of an Islamic “foundation” to fund various cultural activities. Both men are working diligently to implant Islam firmly in France. With every new mosque, every new concession to halal food, every new welcome to imams, they eradicate a bit more of French tradition, and bring the country a step closer to overt conflict. From Le Point:

Manuel Valls wants to meet the challenge of “anything that slows down the Islam of France,” in particular with regard to the training of imams. But he wants also to stem the “reflex” of soliciting foreign countries to finance mosques. “I hope to act, we hope to act… and we hope that everybody, you first among them, see the depth of the problems we have to deal with today,” he declared during a meeting with Muslim leaders at the grand mosque of Strasbourg. “Anything that delays an Islam of France, even if this is already a reality, that’s the great challenge we must face.”

“If there is no miracle recipe, things are little by little taking shape. Larger mosques, more worthy ones, have been built. Now, it is in the field of training that we must invest. And the State wants to provide the means,” said Valls who would later elaborate on this during a visit to the University of Strasbourg, where he announced that the State would increase to twelve, from the current six, the number of universities that offered courses for imams.

Valls insisted that there was no need to seek funds for mosques from foreign countries:

“In France, all the energy, all the necessary resources already exist for the development of Islam.”

He then launched into a condemnation of extremism:

Islamist extremism and the extreme right are two “major dangers for the Republic” that “nourish each other”.

“We must not hide from the challenges we are facing.The rise of populism, of the extreme right, in Europe and in France, feeds naturally on the rise of jihadism, terrorism, and radical extremism. At bottom, these two extremisms feed one another and represent a major danger for our democracy, our society and our ability to live together. I am sometimes surprised, angered, by the fact that people are not sufficiently aware of this. The only answer, the only one, to these two dangers that feed on each other is the Republic. The only answer is laïcité, education, the university, knowledge, intelligence, the ability to live together. Otherwise our plan, our national plan, will be in jeopardy.”

He’s clear about his intention to radically transform France into a Muslim country (which it already is) and to re-program the minds and hearts of the people so that they agree to live side by side with elements that are antithetical to French law, tradition, mores and customs.

And the only reason he is against Islamic extremism is that it fosters the rise of Marine Le Pen. Otherwise it would appear he has no problem with jihad.