Desmond Tutu: Israel guilty of apartheid in treatment of Palestinians

Tutu, the Nobel Peace laureate, criticized Israeli policies toward the Palestinians in the territories as “humiliating.”

“I have witnessed the systemic humiliation of Palestinian men, women and children by members of the Israeli security forces,” he said in a statement.

“Their humiliation is familiar to all black South Africans who were corralled and harassed and insulted and assaulted by the security forces of the apartheid government.”

Father Gabriel Naddaf:  “The assertion of Israel as a so-called Apartheid state is complete nonsense.”

People who believe that believe anything:

Over the weekend a number of Arabic websites “quoted” Israel’s Channel One website with a bizarre story.   (EoZ)

The story supposedly said that there was a cell of 30 young Jews who are being incited by rabbis to carry out suicide bombings against Arabs in the West Bank. The story said that the Shin Bet warned about these impending attacks but didn’t want to do anything about them because of political considerations.

The stgory goes on to say that those responsible for these attacks are rabbis and religious extremists in Jerusalem and the West who sow hatred among young religious Jews against Arabs and Palestinians and therefore try to persuade them to follow the methods of Palestinian terrorists.

Needless to say, no such story can be found on the Channel One website, or anywhere else. And if it was a real story it would be in the front pages of Israeli newspapers – secular and religious -within hours. 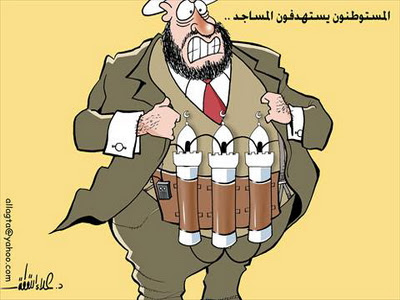 It is rare that Arabic stories are completely made up, so maybe there was a Purim spoof or something that someone read.

Or it is just an extreme case of Arab projection.

I did once find an Arab political cartoon of a Jew with a suicide bomb belt shaped like minarets to show how Jews like to attack mosques, apparently.

No doubt Tutu and the Obamster are in agreement:

” In unusually tough language that underscores the fracture in relations between Washington and Israel, White House Chief of Staff Denis McDonough said “an occupation that has lasted for almost 50 years must end.”
.
McDonough criticized Netanyahu’s pre-election pledge to block the creation of a Palestinian state — the supposed end goal of decades of fruitless peace talks — and he questioned Netanyahu’s efforts to undo the damage.
.
“We cannot simply pretend that those comments were never made, or that they don’t raise questions about the Prime Minister’s commitment to achieving peace through direct negotiations,” he said.
.
“The Palestinian people must have the right to live in and govern themselves in their own sovereign state,” he added.
.
And there you have it. We are now nearing the end of the race, and the horses of prophecy are about to round the clubhouse turn. Obama wants Jerusalem for the mythical Palestinian people, and he is going to take it.
The battle in the Middle East has always been about one thing, and will always be about one thing: Who owns Jerusalem?
.
Why is this of such tantamount importance? Because Jerusalem is where Messiah will return to when the Battle of Armageddon, foretold of by Ezekiel the Prophet, is waged in the valley of Megiddo. Jerusalem is where Messiah will establish His 1,000 reign of the whole earth on the Throne of David. Jerusalem is the “apple of God’s eye”, and soon will command the attention of the whole world.
.
It is almost time for events to begin. The bible tells us who will fight this battle, and more importantly, Who will win the battle.
Are you ready for what comes next?”
.
From: http://www.nowtheendbegins.com/blog/?p=31917