The Islamic State, Pace Al-Abadi, Is A Muslim Problem

Al-Abadi, the Shiite leader of Iraq has complained that something he calls “the world” should do more, more, more for Iraq. He’s unwilling to accept any blame himself for the defeats inflicted by the Islamic State, neither for the apparent confusion, cowardice, disarray of whatever forces the Iraqi state sends to meet the foe, nor for the treatment, by his and earlier Shi’a governments, of the Sunnis who, disaffected, support mildly or ferociously the Islamic State. That’s not surprising — blaming others, finding even a “conspiracy” against this or that group of Muslims, comes naturally to Muslim minds, unwilling to entertain, even for  a minute, the idea that there might be something for which Muslims should be blamed or, still more unthinkable, that Islam itself explains the many failures, political, economic, social, intellectual, and moral, of Muslim states and societies.

But of greatest interest, I think, is the following excerpt from Al-Abadi’s latest remarks:

“Abadi himself called for more from his partners, saying most IS fighters were foreign and therefore an “international problem”.[but every IS fighter, from wherever he comes, is a Muslim — doesn’t this make it a “Muslim problem”?]

“There is a lot of talk of support for Iraq, there is very little on the ground,” he told reporters before the Paris meeting.

He said that roughly six out of 10 IS fighters were foreign, with the remainder Iraqi. 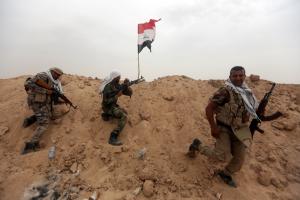 Abadi continued: “There is a lack of intelligence, we are trying very hard on our part but this is a transnational organisation… This is a failure on the part of the world.”[No; it’s a failure — or is it rather a success — of the Sunni Muslims who, as Al-Abadi well knows, to his own chagrin and that of his Iranian allies, regard the Shi’a as Infidels, for the “takfiris” are not a small group, but represent mainstream Sunni attitudes]

One thought on “The Islamic State Is A Muslim Problem”