Prophet Cartoons ‘To Be Televised’ On Saturday

Dutch politician Geert Wilders will use a party political broadcast to air controversial drawings this weekend, says his party.
NEWS.SKY.COM

See More (thanks to the Q-Society)

Just curious: when exactly did this commie rag switch their allegiance to Islam?

(Bizpac Review) – Pay no attention to those beheading plots, attacks on “Draw Muhammad” contests and the occasional bombing at the Boston Marathon. –TEAPARTY.ORG

Halal Shysters Meet In Istanbul To Plot Against Kuffar

“…we don’t need to hear from non-Muslims on what is halal and what is haram. …“

Geert Wilders: The Mohammed Cartoons Will Be Shown on Dutch TV Tomorrow

The Garland Motoons will be displayed on Dutch state TV tomorrow. Below is the press release sent out today by the PVV:

Tomorrow, Saturday, June 20, at 12:49pm [6:49am EDT], Geert Wilders will, following the terror attack on a cartoon exhibition in Garland, Texas last month, show a selection of Muhammad cartoons on Dutch public television (NPO 2) during the broadcasting slot allotted to political parties.

Geert Wilders: “Freedom of speech must always prevail over violence and terror!” 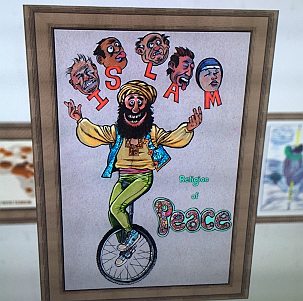 Below are excerpts from an interview with Geert Wilders published by Breitbart London:

Breitbart London: The Dutch parliament has recently blocked an art exhibition you proposed to show a selection of cartoons featuring Mohammad. You are now due to show these cartoons on Dutch television this weekend — will the state broadcaster try to stop you too? And if you succeed in showing the cartoons this weekend, what format will the programme take?

Geert Wilders: Dutch television cannot stop us from showing the cartoons. Every party that is present in parliament has time to show themselves on national TV, and by law they cannot be prevented from broadcasting. Anyone can oppose the programme, but only afterwards but not before.

It will be like a walk though a museum — I will present the viewer a selection of the cartoons myself — first I will explain why I want to show the cartoons, because of what happened in Garland, Texas, and explain that it is not a provocation. We should do exactly what it is terrorists want to stop us from doing — otherwise the message we send to terrorists is that violence and the threat of violence can be effective. And this cannot be the case

We should protect freedom of speech, and we should not give in to terrorists. We should use the paper and pencil to win over those who use guns.

One of the many cartoons of Mohammad that have been blocked from publication in many Western countries by self-censorship among media editors.

You were present at the Draw Mohammad competition hosted by Pamela Geller in Garland, Texas which was attacked by Islamist would-be-terrorists. Should every western country have a draw Mohammed competition?

END_OF_DOCUMENT_TOKEN_TO_BE_REPLACED

One thought on “Wilders will televise Motoons on Saturday”